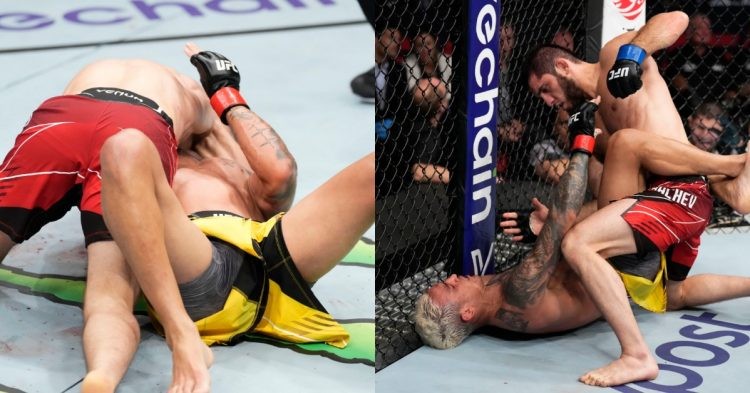 The wait is over! The UFC Lightweight division finally has a champion and his name is Islam Makhachev. After a long build-up, Makhachev finally faced Charles Oliveira at the UFC 280 main event. A lot of speculation took place on whether Islam can submit the most prolific submission artist in the UFC or not.

Islam gave the answer in an emphatic way as he tapped out Oliveira in the second round of their fight. A lot was made about the notion that Do Bronx is the better striker. However, it was the Dagestani wrestler who got the better of Oliveira in the striking exchanges. The former champ spent the majority of the first round on his back after a failed takedown attempt.

Hence, he decided to stay on his feet for the second round. Even that did not work out as a big punch from Islam dropped Oliveria. It was the beginning of the end as Islam followed him to the ground and submitted him with an arm triangle. With that, he became the new lightweight champion and the few face of the division. Makhachev also stated that he would like to face Alexander Volkanovski next.

Ahead of this fight, Charles Oliveira was coming off a win over Justin Gaethje at UFC 274. During that fight, everything Oliveira landed, got a big reaction from Gaethje. Afterwards, Justin stated that he never felt anyone with the power that Charles possesses. However, it seemed pretty ineffective against Islam Makhachev, who just ran through the Brazilian fighter.

Islam Makhachev outstruck him, dropped him, and submitted him. 🔥 what a statement win! 🏆
I’m extremely happy and so proud of you Islam! You deserve it. Hard work pays off. 💯 #UFC280 #AndNew pic.twitter.com/0DVeFNYeil

As per the stats, Oliveira landed 19 significant shots throughout the course of two rounds. Islam, on the other hand, landed 30 significant strikes. Makhachev’s strikes seemed significantly more powerful than Charles’ and it drove some fans insane! They could not believe that Islam really dominated Charles on his feet and dropped him.

Showing bum strikers how to get the job done

What a finish! They will need fire department to put that fire out.

Where are all these clowns now?
Every single one of em?

They level’s for this shit 👑 🥴

Did you have an opportunity to catch the fight? If you did, what did you think of it? Let us know in the comments down below.