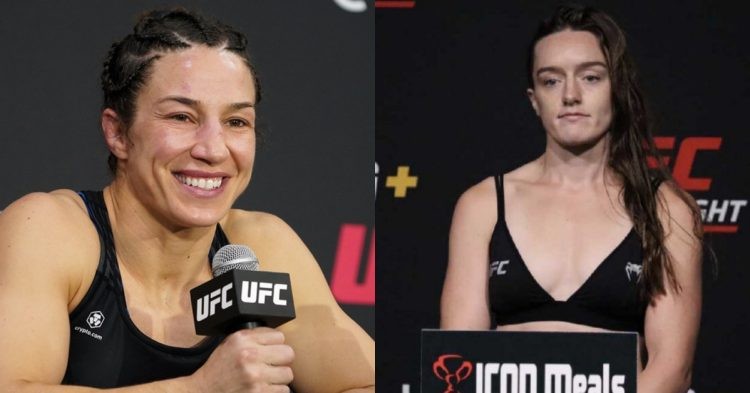 UFC has released the bantamweight fighter, Sara McMann. The decision comes after her recently cancelled bouts against Aspen Ladd. They were previously scheduled to fight in August, but it was then moved to September. Even after rescheduling, the fight ultimately did not happen as Ladd missed weight.

Although she won her last fight against Karol Rosa on March 26th of this year, Sara has only managed to win 2 of her last 5 fights. She joined the company in 2013 and has accumulated a record of 7-6 in her 13 fights. She has fought the very best in the sport. McMann went up against Amanda Nunes, Ronda Rousey and Miesha Tate throughout the course of her career.

But she did not manage to win a title in her MMA career. However, Sara is one of the most respected grapplers in the sport. Her wrestling is elite and she has submitted 5 of her opponents in MMA. But that is not surprising as McMann is a silver medalist in the 2004 Olympic Games. She has achieved success in other wrestling competitions as well.

At the age of 41, it remains to be seen whether she wants to keep fighting any longer or hang up her gloves for good. However, it is unfortunate that Sara McMann could not fight at the last week’s event to finish her UFC career on a high note.

Update: After a furious backlash from the fan, it looks like the UFC has added her back in the fold. However, there remains a possibility that the whole thing was a technical glitch. Or, maybe there was some mistake on UFC’s end which removed Sara McMann from the roster momentarily.

Sara McMann was veteran a in the sport who may have retired in a short period of time anyway. However, fans did not think she was the fighter that UFC should have cut from the promotion. Her last scheduled opponent, Aspen Ladd was the one to miss weight in the fight. Hence, there are fans who think Ladd should have been on the chopping blocks instead of Sara.

Aspen Ladd has a history of not being able to make weight safely. Before this weekend, she had difficulties making weight for her bouts against Leslie Smith, Macy Chiasson and Germaine de Randamie. During almost all of the above-mentioned fights, the weight cut was brutal and it was evident by her weigh-in attempts.

Hence, it is understandable why the fans are upset at the decision from the UFC to let Sara go instead of Aspen Ladd.

They miss clicked her over Aspan Ladd

She declines a fight cause Ladd came in overweight and SHE gets cut. LMAO 💀

What are your thoughts on the matter? Do you think Aspen Ladd should have gotten cut from the UFC instead of Sara McMann? let us know in the comments down below.