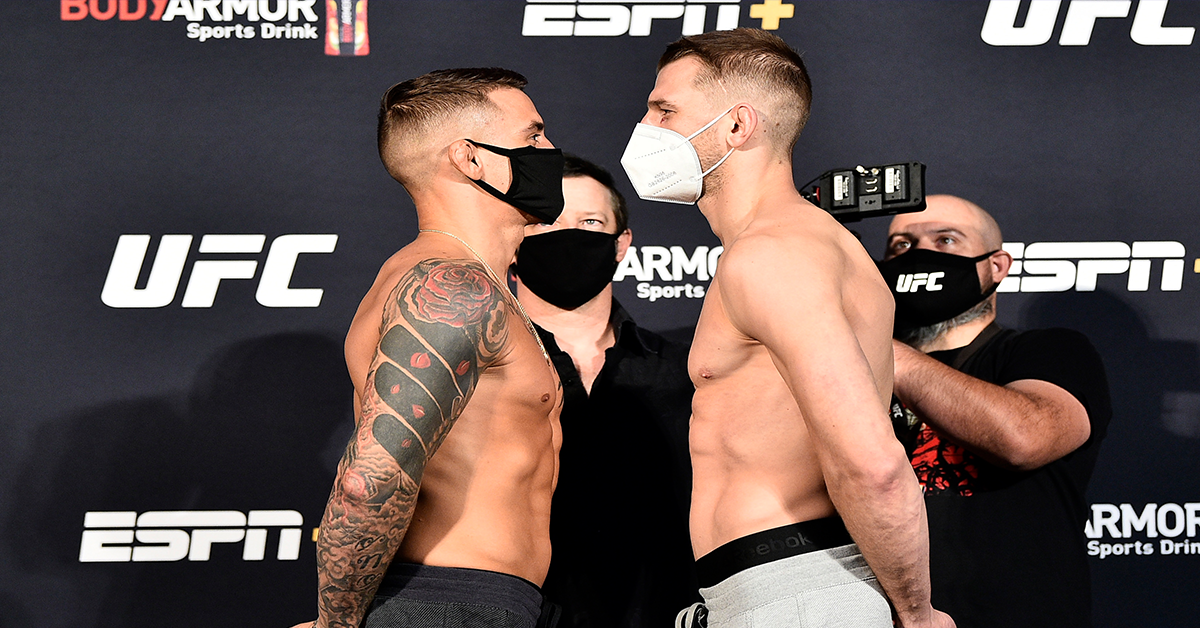 On the other hand, Dan Hooker is coming off a 3 fight win streak including the likes of Paul Felder and Al Iaquinta. Well, the momentum seems to be in the favor of Hooker and he will be supremely confident when he enters the octagon at UFC Apex. However, will that be enough to beat the veteran, Dustin Poirier?

Not always you can guarantee that a certain fight is going to deliver as per the expectation. But, this fight has “Fight of the Night” written all over it.

The majority of the fight between Dan Hooker and Dustin Poirier will take place on the feet. And none of the fighters are known for their offensive ground game even if they have a few submission victories in their career so far.

In striking Hooker and Poirier are very different. Poirier is an elite boxer while Hooker is more of a kickboxer. Now it can’t be concluded that Poirier’s arsenal is limited to his boxing skills. He will throw leg kicks to reset the rhythm of his opponent or respond to his opponent’s leg kicks. But Poirier is a head hunter and it can be seen from his past fight stats.

He is not likely to knock his opponent out with one punch. But he does throw some heavy shots that can cause huge damage to Dan Hooker.

Conor McGregor or title shot? Who’s next for the winner of Dustin Poirier vs Dan Hooker

Coming from City kickboxing, Dan Hooker trains with arguably the best striker in UFC, Israel Adesanya, and the featherweight champion, Alexander Volkanovski. And the fighters from that gym are a step ahead of the rest when it comes to striking.

Dan Hooker has the reach advantage. He uses faints in his striking, which makes it more difficult for the opponent to react. He can cause significant damage with his kicks and knees.

It can be said that Hooker is a better striker when compared to Poirier. But Poirier has the experience factor in his favor. He is durable and he has the power to finish the fight in the later rounds.

Dan Hooker slowed down in his fight against Paul Felder. But he will surely be better conditioned this time in probably the most crucial fight of his career.

Even though Poirier’s resume looks more impressive, Dan Hooker is a problem. He is a versatile striker and he has one of the nastiest knees in the game. He is not going to create a lot of angles as Adesanya, but he will find the holes in Poirier’s defense.

I see Dustin Poirier winning the fight via late round finish or by decision. But Poirier will have to be more versatile in his attack. The headhunting game might backfire against someone like Dan Hooker who is rangier than the other lightweights and who is a better striker.

But overall, it’s a winnable fight for the former interim champion. However, it is not going to be easy. The momentum is with Dan Hooker and we have seen time and time again how crucial that can be. It won’t be surprising at all if Dan Hooker catches Poirier with a left hook and wins the fight.