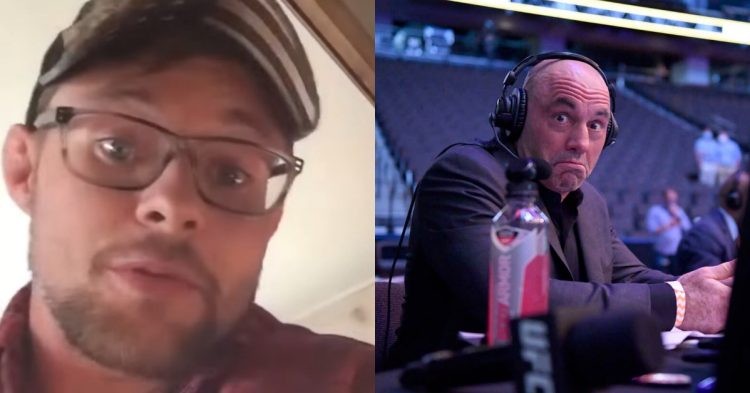 There is a brand new feud brewing in the world of Mixed Martial Arts (MMA). Usually, one fighter calls out the other one and it starts a rivalry. However, this time, it is between the UFC featherweight fighter Bryce Mitchell and Joe Rogan as the former calls out Rogan for apparently targetting him and his mother!

Before one lets their imagination run wild regarding what the conflict may be, nothing serious is at stake. Recently, Bryce made a humourous video and called out Joe Rogan for telling the world that the earth is round. To Mitchell, it feels like Rogan is taking shots at him and his dearest mother who believes that the earth is flat!

In the video, there was obviously a touch of comedy as he was addressing the UFC colour commentator. However, Bryce, who has some interesting and different worldviews, seemed like he was serious about his belief of the earth being flat and he was even ready to debate the host of the world-famous podcast, ‘The Joe Rogan Experience.’

“Hey, I’m here to call out Joe Rogan for talking c*** about me and talking crap about my mama. He’s been doing it for too long. Me and my mama will tell you right now, this earth is flat. It ain’t moving around at no 600 something thousand miles an hour, spinning at 1000 miles an hour and floating through the universe constantly, okay?”

“This earth is flat, it’s fixed and the stars and stuff rotate around us. The sun rotates around us, okay? and I can prove that. I’d love to debate you Joe Rogan, cause I’m tired of you making fun of flat earthers.”

What is next for Bryce Mitchell in the UFC?

Regardless of what his opinions are, Bryce Mitchell is a top prospect in the UFC featherweight division. His debut for the company was in 2018 when he beat Tyler Diamond via a majority decision. He then followed it up with a good win over Bobby Moffett in 2019. But then, he submitted Matt Sayles via an incredibly rare submission, Twister, in the next fight.

It built up a great reputation for him as a grappler. He did not stop there and went on to beat Charles Rosa, Andre Fili and Edson Barboza in his next three fights. The 28-year-old currently holds an undefeated record of 15-0. He has also found a ranking beside his name as he occupies the 9th spot in the 145lbs division.

As of now, Mitchell is not scheduled for a contest. He was supposed to fight another highly regarded prospect, Movsar Evloev in a Fight Night event. However, that fight fell through as Evloev suffered an injury. Although there are talks of him taking on Ilia Topuria, UFC has not announced anything officially.

Who do you want to see Bryce Mitchell fight next? There are fighters like Giga Chikadze and The Korean Zombie who are not matched up with an opponent. Would you like to see Mitchell going up against any of them? Let us know your pick about Thug Nasty‘s next opponent in the comments section down below.