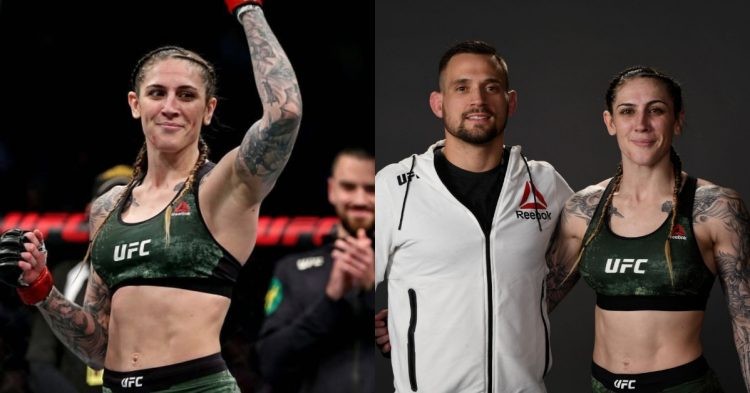 Former UFC women’s featherweight title contender Megan Anderson is making a ton of noise on Twitter. Recently, in a deleted tweet, she blasted Glory MMA head coach James Krause. She accused James of not providing her the adequate training sessions for her title bout against Amanda Nunes at UFC 259. But that is not the most scandalous claim from Megan.

The Australian MMA fighter addressed the fans about what really went on with her training camp for the Amanda Nunes fight. According to her, despite several requests for personal training sessions, Anderson did not receive any personal attention. Megan revealed the current men’s interim flyweight champ Brandon Moreno had a coach with him at all times. But she did not have the same privilege.

Fans accused Megan Anderson of blaming her coaches for his shortcoming against Nunes in 2021. In the fight, Amanda ran through the 32-year-old as he submitted Megan in the first round of the bout. She did not seem prepared at all to take on perhaps the best female combat sports athlete of all time. But, according to Megan she only did pad work in preparation for the fight as there was no proper structure for the camp.

However, perhaps the biggest claim that she made, did not have anything to do with the fight camp. In a deleted tweet, Megan claimed that James had an affair with UFC presenter Laura Sanko. Both Laura and James are married to other people. Hence, Anderson’s claim reflects very poorly on Krause.

Jeff Molina is a part of Glory MMA. Megan Anderson joined the gym in 2015 and left after her loss at UFC 259 in 2021. It is clear that there is a ton of bad blood from Anderson’s side as she made some serious allegations against Glory MMA coach James Krause. Although James himself did not issue a statement on the matter, one of his fighters did!

Molina rubbished the claims of James’ lack of attention towards Megan and put the blame on her. Molina claimed Anderson always spoke about her fatigue immediately after her sparring sessions started. Hence, Jeff wants Megan to “take some accountability.”

“This couldn’t be farther from the truth. Way to wait until MMA twitter is trashing JK for his fighter fighting injured just like 90% of fighters do just cause u want some Twitter clout. I was there your entire training camp for Nunes. You sat out 99% of the live rds, you would ask your training partners “jokingly” to let you win the rd, you were the laziest training partner always talking about how tired you were 5min into drilling, you would intentionally hurt training partners who were new and had an obvious skill gap (you broke a soccer moms nose in probably one of the few rds of sparring you did outside of practice),” wrote Molina.

“You have an alcohol problem and we’re sloshed a month and a half before your title fight, you burned bridges with every single person in the gym including the front desk guy because of how much of a head case you are. Don’t forget how Krause talked you off the ledge before every fight and how complimentary you were of him for changing your career and life. You lose one fight and now everything changes? Take some accountability for yourself. You lost that fight the second you signed the dotted line look in the mirror that’s why you lost that fight.”

Jeff’s statements certainly discredit Megan Anderson’s accusations. However, it is important to note that Jeff Molina is James Krause’s fighter. So he merely defended the honor of his coach. There seems to be a big difference between the statements from the two camps. Hence, it will not be a wise decision to jump to any conclusion and pick a side.

James Krause is not the most popular figure in the world of MMA at the moment. At UFC Vegas 64, James’ fighter Darrick Minner seemed to have a questionable loss. Reports came out later that the result of the bout was under investigation for usual gambling activities. However, UFC issued a statement and clarified that neither fighters nor their coaches are under any suspicion.

Krause openly stated that he makes a lot of money from gambling on fights. Hence, fans found the whole incident very suspicious.

What is your take on the matter? Let us know in the comments down below!