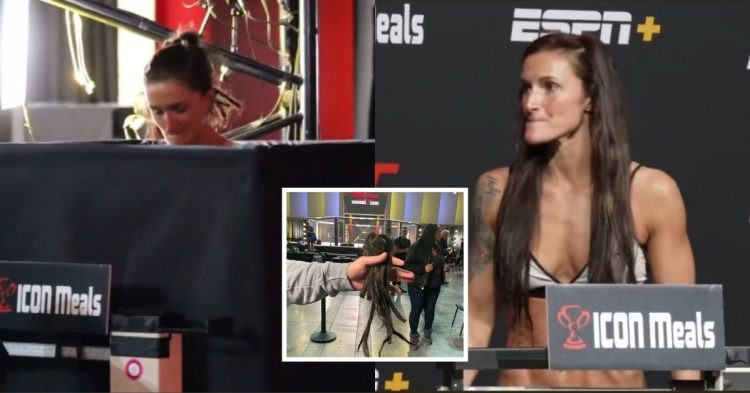 Shanna Young is set to fight Miranda Maverick in the prelims of UFC Vegas 64. Both fighters will make the walk to the Octagon on November 5th as both are on weight. Although Miranda Maverick weighed in at 125.5 for the non-title flyweight bout, Shanna made the weight on her third try and she had to sacrifice a chunk of her hair to make the limit of 126lbs.

On her first attempt to make weight, Shanna Young came in exactly at 127lbs. It was 1lbs over the non-title flyweight limit of 126lbs. She returned to weigh in once more, but Young was still 0.25lbs above the limit. However, that is when she decided to take a drastic measure and chop off her hair. Fortunately for her, it worked and she weighed in at 126lbs.

Shanna Young makes weight on her third attempt.
126 on the dot#UFCVegas64 pic.twitter.com/MZcd5CwzpI

This will be her 4th UFC fight since her debut in 2020. After losing both her first two fights in the Octagon, Shanna Young won her last fight via TKO against Gina Mazany earlier in the year. She returned to flyweight for the Mazany fight after failing to win her bantamweight bouts. This also marks the first time she missed weight in her career.

Ex-UFC fighter Jeremy Stephens missed weight initially for PFL 4 in June. But much like Shanna, Jeremy also shaved off his head and beard to make the weight.

The upcoming UFC Vegas 64 has 12 fights on its card. Out of 24 fighters in the event, 5 fighters missed weight on their initial attempt to weigh in. Although Shanna Young later made the weight, 4 other fighters did not attempt to reduce their weight and come under the limit. On the main card, Grant Dawson missed weight by 1.5lbs (157.5lbs) for his lightweight bout against Mark Madsen.

In the prelims, Benito Lopez weighed in at 138.5lbs for his bantamweight clash against Mario Bautista. Lopez was 2.5lbs over the limit. Carlos Candelario also missed weight by 2.5lbs, as he weighed in at 128.5lbs for the flyweight fight against Jake Hadley. The other fighter to miss weight was Ramona Pascual, who missed weight by 2lbs (137lbs) for her bantamweight clash against Tamires Vidal.

Ramona Pascual, Benito Lopez and Carlos Candelario were fired 20% of their total fight purses. But Grant Dawson was fined 30% as he missed weight previously as well,