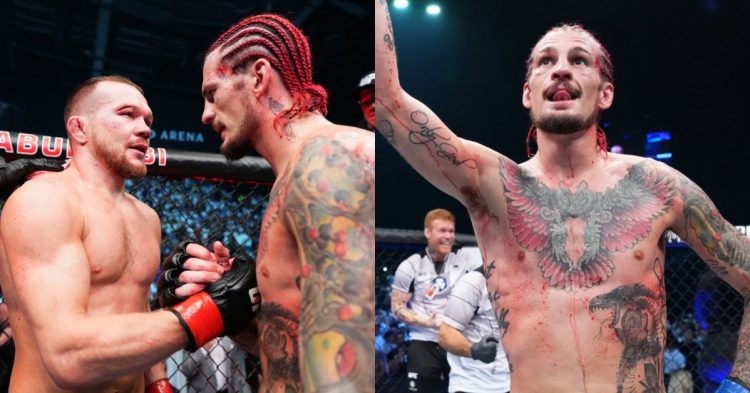 Sean O’Malley proves his critics wrong as he edges out an incredibly close fight against Petr Yan at UFC 280. When this fight was made, fans wondered why the UFC was putting up a fight against the no. 1 contender in the 135lbs division against someone who was ranked outside the top 10. But they have their answer now, as the pair puts on one of the best fights of the Year 2022.

The first round was a bit slow, to begin with. Both Sean O’Malley and Petr Yan had to respect each other’s power. Despite that, both landed a lot of good strikes. But Yan was the one to land a takedown right at the end of the round. But O’Malley countered it in a beautiful scramble. However, it was the second round which brought down the house.

Sean started things off with a massive right hand that rocked the former champ. As Petr started to backpaddle, O’Malley landed a lot of significant strikes. But he could not connect with his full power as Yan started to recover. The Russian then came back to land a massive hook himself that buckled O’Malley. Taking advantage of that, he landed 3 takedowns in the round as well.

In round 3, Sugar Sean landed a big head kick which busted up Yan. But it did not slow down Petr as he spammed Sean with one takedown attempt after another. The fight ended with Yan raining down punches on a grounded O’Malley. Hence, the fans expected Yan to walk away with the win. But in a shocking decision, It was O’Malley who got the win.

In terms of damage, it looked like both fighters did an equal amount of damage to each other. However, if fans on Twitter are to be believed, they feel Petr Yan was robbed against O’Malley at UFC 280.

He didn’t defeat anyone lmao

Great fight but judges on crack

love suga but robbery I fear

What are your thoughts on the fight? Did you think Sean O’Malley deserved to win? Or, do you think Petr Yan’s loss was unfair? Let us know in the comments down below.