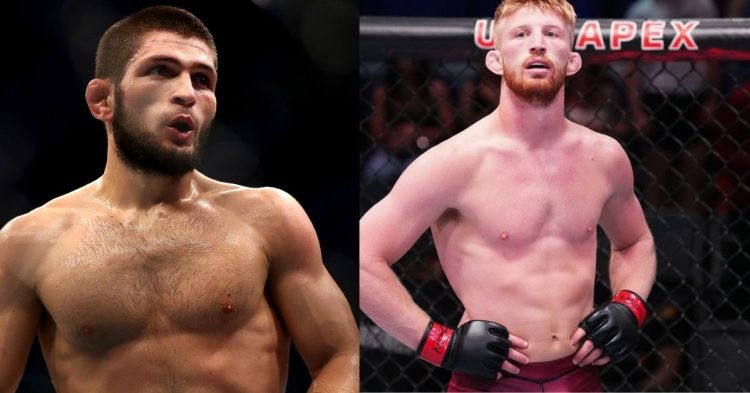 Chael Sonnen talked about Bo Nickal, the promising prospect who was recently signed in the UFC, and how good his wrestling is. Sonnen pondered upon the question if Bo is the best wrestler to be in the UFC as he is one of the most highly decorated wrestlers to ever compete in the promotion.

“The best wrestler the sport of MMA has ever seen who got more takedowns and got taken down less than anybody is a guy who’s never had a wrestling match. His name is George Saint Pierre.”

Chael sidelined Khabib and his successor Islam Makhachev while implying that GSP should be named the best wrestler in the UFC, based on the stats.

Sonnen implied that Khabib, who made his career through offensive wrestling, is second on the list of best wrestlers in the UFC. The point Chael made is that even though inside the Octagon Khabib is known for his wrestling, he doesn’t represent wrestling in the first place. Chael added:

“…Khabib Nurmagomedov respects wrestling, but he doesn’t represent it. He represents Sambo and he’s proud and that’s what he wants to do. And the next thing on his list is Judo.”

‘The Eagle’ spent a lot of time in training wrestling however, he does not represent it. So, it remains a big question if Bo can showcase his wrestling and make it work like Khabib, Chimaev, and others inside the Octagon.

How would Bo Nickal do against the best fighters in the UFC?

Bo Nickal has a tremendous domain in wrestling, which can be proven by his incredible wrestling background. He holds three gold medals in the NCAA Division 1 National Championship and other championships as well.

This young prospect holds a freestyle wrestling record of 28-10 and an NCAA record of 120-3 to his name. However, just by that Bo cannot be called the best wrestler to ever compete in the UFC.

Daniel Cormier stated once that Yoel Romero is the most decorated wrestler to ever be in the promotion. However, Henry Cejudo would argue with that if he was the promotion. According to Sonnen, Bo surely comes into the picture when someone talks about the best wrestlers, however, the young prospect has to make it work in the octagon as well.

Chael speculated if Nickal could maintain his spotless record just like Chimaev. The 26-year-old currently boasts a professional MMA record of 3-0 and was recently scheduled to fight Jamie Pickett at UFC 282.

Sonnen pointed out that Bo Nickal has youth on his side, and in the future, he could get a title shot if he continues to perform well. ‘The American Gangster’ suggested that although Bo is new to the MMA, he knows how to compete.

According to Sonnen, if Nickal continues to dominate in the octagon, public opinion will eventually turn against him. This has happened with Khamzat Chimaev recently. However, the answer to the question if Bo is the best wrestler ever could be found if Bo continues his winning ways in the promotion, and if he can fair against the skilled elites of the division.