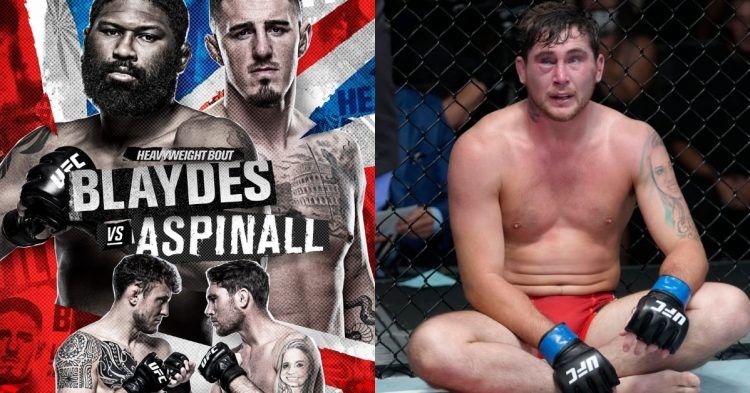 Darren Till misses out on UFC London. (Images via Twitter)

The upcoming UFC Fight Night London loses its co-main event as Darren Till pulls out of his fight against Jack Hermansson. A report from ESPN journalist Marc Raimondi revealed that Till will not be available for the event due to an injury. However, the severity of Darren’s injury is yet to be revealed.

Darren Till was scheduled to take on Jack Hermanasson in his home country. Till, who made his middleweight debut in 2019, has a record of 1 win and 2 losses in the division.

Darren Till is out of the scheduled middleweight co-headliner against Jack Hermansson at UFC London on July 23 due to an undisclosed injury, sources told @MarcRaimondi. pic.twitter.com/VKjksiZrU1

After beating Kelvin Gastelum in his first 185lbs fight, Till lost to Robert Whittaker and Derek Brunson in consecutive fights. His move to the division came on the back of a two-fight losing streak at welterweight.

Hence, the bout against Hermansson was perhaps the most important one of his UFC career so far. Jack is currently ranked 8th in the middleweight division. A win over the Joker would have revived Till’s dwindling career.

The 29-year-old was one of the hottest prospects at the time of his arrival in the UFC. But judging by his recent performances, Till is a long way off from fulfilling his true potential.

Darren currently holds a career record of 18-4-1 and a UFC record of 6-4-1. At this time, there is no potential timeline for his comeback to the Octagon.

Following the news of Darren Till’s unfortunate injury, unranked middleweight fighter Chris Curtis has risen up to the occasion. He will now take on Jack Hermansson in a short-notice fight. A report from MMA FIGHTING confirms the news.

It will be a massive opportunity for Curtis. Since, his debut late last year, Chris has already fought 3 times in the UFC. The 34-year-old is currently unbeaten in the promotion with 3 wins. He holds a professional record of 29-8.

His last loss was in 2019 and Curtis has gone unbeaten in all of his previous 8 contests. A win on July 23rd will see him breaking into the Top 10 of the division.

Despite having a new co-headliner, the rest of the card will remain the same as announced before. Tom Aspinall vs Curtis Blaydes will serve as the main event of the night. The main card will also feature the fan favourite Paddy Pimblett, Molly McCann and a returning Alexander Gustafsson.