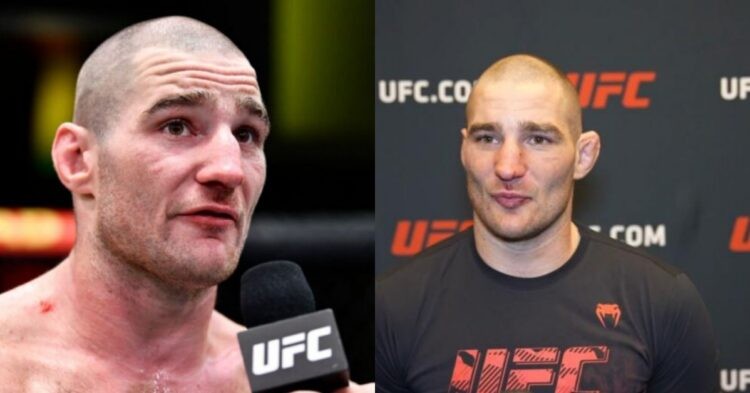 UFC middleweight fighter Sean Strickland has been banned from Twitter! Sean is known for his controversial comments and takes on social media. Recently, he had a few homophobic tweets which irked the authorities and resulted in a ban on his Twitter account.

Mixed Martial Arts has grown exponentially in the last decade. The sport has gone from being an underground sensation to a mainstream phenomenon. However, the personalities surrounding the sport have not always been very progressive. Sean Strickland is one such personality. He previously spoke on his mental health and his urge to self-harm and or potentially hurt others outside the Octagon.

Hence, it is not surprising to hear Strickland making transphobic comments. UFC is not very restrictive of what their fights say. But Twitter is much more strict on accounts that make such controversial comments. Here’s what he wrote on his now-suspended Twitter account,

“I’m actually a fan of pride month.. Big fan of the b in LGBT lmao!!! Trans people though god I can’t f**King stand trans people.. Has to be some form of mental retardation…” (h/t via Sportskeeda)

He followed up with another distasteful comment that read,

“if you have a c**k and balls, even if you remove them you Will never be a f**King woman bottom line. I Don’t give a f**k if you grow your hair out and cut your c**k off. You Will always be a nutless mentally ill Man bottom line.” (h/t via Sportskeeda)

When is Sean Strickland fighting next?

Twitter has the power to restore any account which has been suspended. Hence, there is a possibility that the micro-blogging site decides to let Sean Strickland continue his Twitter account if an apology is issued. However, Strickland is not the one to budge under pressure. As a result, the fans may have seen the last of the Tarzan on Twitter.

As for his next opponent, Sean Strickland will fight Alex Pereira on July 2nd at UFC 276. If their personalities are anything to go by, it promises to be a banger of a fight. Strickland currently occupies the no. 4 ranking in the UFC middleweight division. While Pereira is currently unranked. But importantly he is the only fighter to knock out the current 185lbs champion Israel Adesanya. Hence, the UFC is definitely trying to put on the rematch in their organisation. An MMA rematch of the kickboxing bout promises to be iconic.

But a win for Strickland may also put him in a position where he can demand a title shot himself. With the champ Israel Adesanya desperately needing fresh opponents to fight, both Sean Strickland and Alex Pereira would be a breath of fresh air for the champ and the fans.