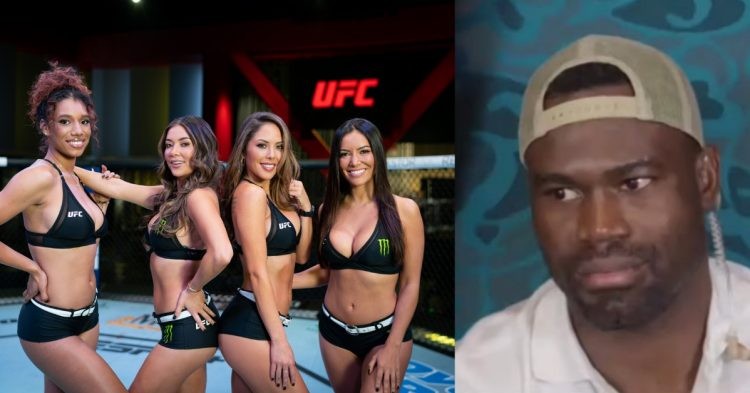 Uriah Hall is all set to make his boxing debut against former NFL running back Le’Veon Bell on October 29th. Hall, who retired from Mixed Martian Arts (MMA) earlier this year, will take on Bell in a 4-round pro bout. Ahead of the fight, Hall commented on the salaries that some of the UFC fighters make compared to the ring girls and the difference is shocking!

However, his criticisms were not only for the UFC. Hall also questioned whether Jake Paul is bringing the issue of fighter pay to the forefront to help the underpaid athletes or using it as merely a tool in his personal war against the UFC president Dana White. Then, the former UFC middleweight fighter went on to reveal the most shocking pay gap in the company.

“There’s a lot of things that aren’t fair. I don’t think certain things are fair to athletes and for [Jake Paul] to speak out on that, kudos to him but is anything done yet? Nope. How far can we take it?

Uriah Hall is not the only fighter in recent memory to speak up against the fighter pay issue. The current UFC bantamweight champ Aljamain Sterling also spoke on the issue a while back. Although he is currently scheduled to fight TJ Dillashaw at UFC 280, Aljo previously refused to accept the fight as he thought he was not fairly compensated.

Even though Khabib Nurmagomedov may not think so, UFC ring girls certainly do bring an entertainment factor to the broadcast. If Hall has to be believed, then ring girls make $70,000 per appearance, whereas a new UFC fighter starts off with a package of $10,000 to make the walk to the cage. Fighters, who actually put their lives on the line in the Octagon, are not getting paid what they are worth.

How much money did Uriah Hall make in his UFC career?

Uriah Hall had a very extensive run in the UFC. Since making his UFC debut in 2013, the 38-year-old had 19 fights in the promotion. During that, he had a record of 10-9. He started off with only $8,000 for his main roster debut against Kelvin Gastelum in The Ultimate Fighter season 19 finale. In his next six fights, his salary was stuck in the six figures.

In his last fight in the UFC, he took on Andre Muniz. Hall lost the fight via unanimous decision and reportedly made $100,000 for the contest. Uriah has hinted that he will be making a lot more money than he did while fighting for the UFC. However, it is unclear what the exact amount is.