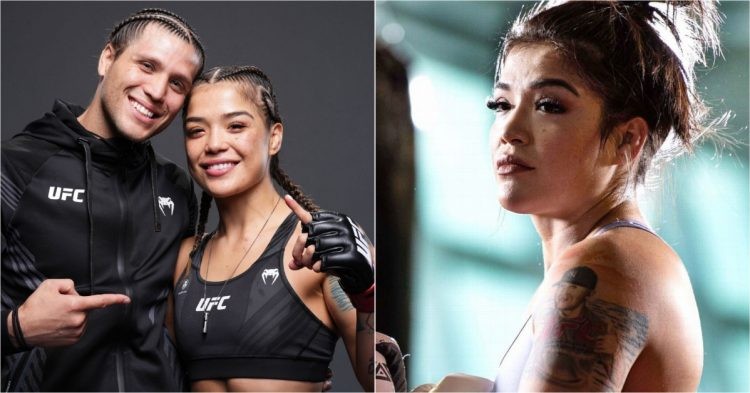 In the last 3 years, Tracy Cortez has only fought 4 times. She pulled out of her fight against Amanda Ribas at UFC Orlando in December last year. The promotion cited the reason for her pulling out to be “medical issues”. However, Cortez would later take to social media to address her canceled bout and she opened up in a way few had expected her to.

In a video shared on her social media, Cortez talked about her physical and mental strife over the past months. She revealed that the reason behind her social media inactivity was her mental health. Tracy also said that she had been depressed since August yet she continued to train for fights.

With Tracy’s revealing statements post-UFC Orlando, it is safe to assume that she was also going through a lot when her relationship with Brian Ortega reportedly ended. This came to light when an eagle-eyed user noticed that both fighters had removed each other’s pictures from their respective social media. Perhaps Tracy’s mental health struggles contributed to the end of her relationship with T-City.

Tracy Cortez and Brian Ortega delete each others’ photos on Instagram

Tracy Cortez and Brian Ortega began dating sometime in 2020 after Ortega commented on one of Tracy’s Instagram posts. Ahead of UFC 266, Cortez and Ortega announced their engagement in a cheeky Instagram post. And Cortez later confirmed this in a reply to Laura Sanko’s comment. T-City and Cortez’s relationship was heavily featured during their UFC careers. The couple even appeared together on the UFC Embedded series.

However, the couple has seemingly split after dating for approximately two years and being engaged for one. They reportedly split sometime in January. This rumor became the talk of the MMA community. Cortez even changed her profile name on Instagram back to Tracy R. Cortez. Previously, it was Tracy R. Ortega. The couple have not confirmed this alleged split and no reason has been reported yet either.

Neither fighter has had a stellar performance as of late in the UFC. Perhaps that could be the reason behind their breakup. Ortega once said, “…as long as we stay out of each other’s way when it comes to different camps and stuff like that it will be alright”.

Maybe the couple had issues separating their personal and professional lives. Regardless, this is merely speculation and everyone will only learn the truth once either Ortega or Cortez acknowledges these events.