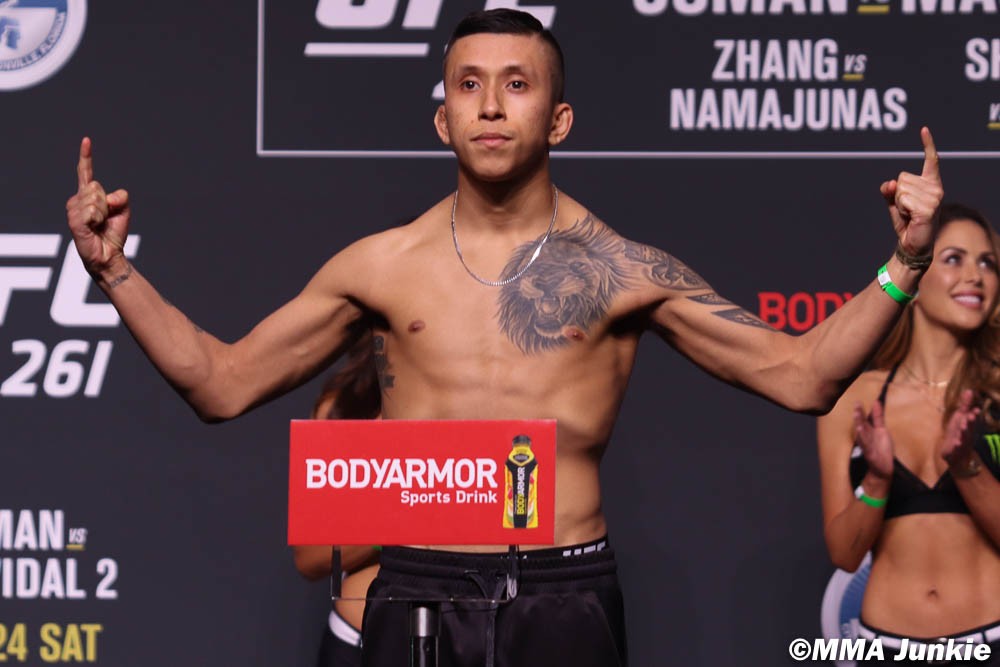 This weekend at UFC Vegas 41 the fight fans will witness a blockbuster main event fight between Paulo Costa and Marvin Vettori. Costa and Vettori will be squaring off against each other in the Light Heavyweight division. The fight would be taking place at the UFC Apex in Las Vegas. But before the main card kicks off, a preliminary bout will take place, which includes a fight between flyweight prospects Jeff Molina and Daniel Lacerda.

Jeff Molina (9-2) is on an impressive eight-fight winning streak with six finishes over the past four years, capped off by victories over Jacob Silva and Qileng Aori at Dana White’s Contender Series and UFC 261, respectively. Molina will be competing for the second time in the UFC promotion.

Daniel Lacerda (11-1) is a training partner of UFC welterweight fighter Alex “Cowboy” Oliveira in Brazil. He signed with the promotion after knocking out Rodrigo Sarafian at Shooto Brasil in Rio de Janeiro, his third first-round finish in a row. The only blemish in his career was a shoulder injury suffered in a Shooto Brasil title fight in 2019.

Jeff Molina is entirely the type of fighter you can tell that has idolized James Krause a lot in his life. He’s originally from Krause’s neck of the woods and trains under the Glory MMA head coach. You can see it in his striking style, he’s very loose and likes to mix the odd knee in there. He has great feints that get a bite from just about everybody.

Lacerda is new to the UFC and he comes to us by way of Brazilian regionals. He has fought a few times for Brazil’s most notable promotions Shooto Brazil and Jungle Fights. Lacerda obviously has an incredible speed. He also throws a nice sidekick to the body for spacing purposes.

We think the feints, which typically do great work for Molina, are going to be less effective against Lacerda at UFC Vegas 41. Molina hasn’t finished anyone with strikes in some time and we think the advantage in the striking will go to the wilder Lacerda and the fight as well.