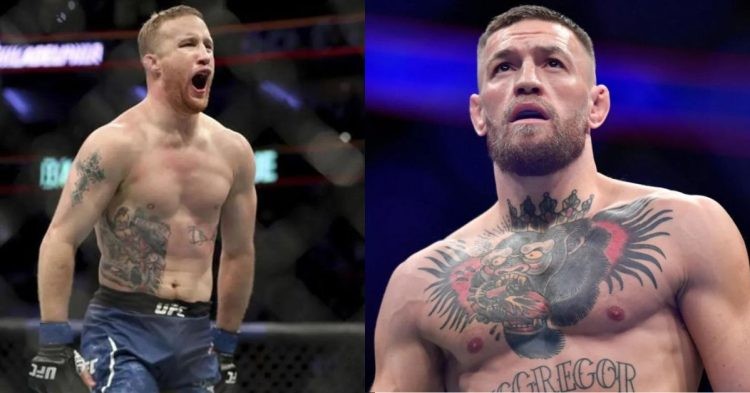 The former two-division champ Conor McGregor finally has a potential opponent for his return fight in the promotion. There have been a lot of rumors and speculations around the return of the Irishman.

Conor’s comeback is one of the hottest topics in the UFC and it’s been more than a year since his last appearance in the octagon against Dustin Poirier. There were some talks of McGregor coming back this year but if McGregor returns as early as January that would still be six months later than expected.

As per the report, UFC is eyeing McGregor vs. Gaethje in 2023 if McGregor can get ready by the beginning of the next year. Gaethje wants the fight as well, so it is now all up to McGregor if he can bounce back following his injury and recovery.

Justin Gaethje has another secondary opponent in the rising prospect Rafael Fiziev if McGregor’s fight goes sideways. Fiziev has expressed his desire to fight Justin to declare the ‘nose job king’ after both men recently underwent the same nose surgery.

Fiziev recently broke his nose in his fight against Rafael Dos Anjos, where he picked up the biggest win of his UFC career by knocking out the former champion. On the other hand, Gaethje also underwent nose surgery following his loss to Charles Oliveira at UFC 274 in May.

McGregor’s manager and Paradigm Sports agent Tim Simpson stated that ‘The Notorious’ is getting ready for a big return next year. He also said that McGregor has been training multiple sessions per day while his leg is still recovering. He said:

“He’s got his full team out there: the McGregor Fast team, all his health and fitness guys, physio, boxing, coaching.

He’s been going hard. He’s been training super hard. He’s in amazing shape – just final adjustments to get that leg back where it needs to be,” Simpson concluded.

Meanwhile, Justin Gaethje is also coming off nose surgery recently. ‘The Highlight’ hadn’t been able to breathe through his nose for over a decade after injuring it early in his wrestling career.

“I broke it in wrestling practice 13 years ago, and life’s been hell since then… I don’t even know what my f****ng voice sounds like. I’ve been waiting for a long time to get this broken,” Gaethje said talking about his ‘broken’ nose.

Justin said that he had hoped his past opponents may have been able to break it for him so he didn’t need surgery. It has still not been confirmed if McGregor wants the fight against Gaethje. However, it seems that the Irishman is certainly looking to make his return next year.