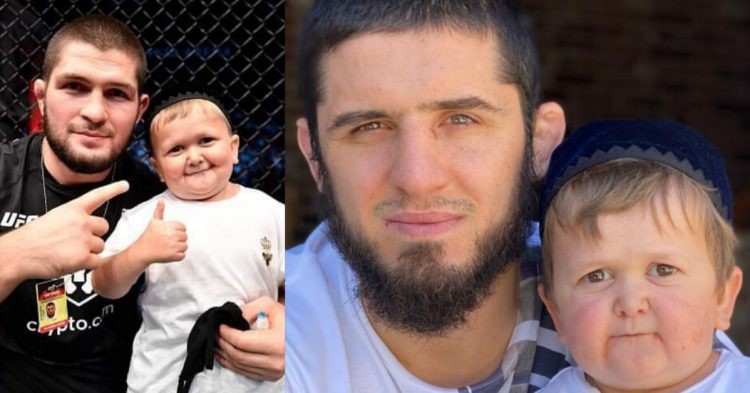 Islam Makhachev vs Charles Oliveira is inching closer. The lightweight dream fight will be for the vacant championship of the division. Both Charles and Islam are currently working hard to be as prepared as possible for the mega-contest. However, it looks like Makhachev will have an x-factor as Hasbulla is set to be in his corner at UFC 280.

According to a report from Full Violence, the internet celebrity Hasbulla will a part of Makhachev’s corner for the main event of the upcoming PPV on October 22nd. He is a massive fan of Islam’s cousin Khabib Nurmagomedov. He was previously seen posing alongside The Eagle multiple times previously. So the inclusion of Hasbulla is a no-brainer.

Although it will be a nice spectacle to see Hasbulla in Makhachev’s corner, he is not expected to have a very active role during the actual fight. But the last time he was in attendance for a UFC event, the 19-year-old was involved in a scuffle with Abdu Rozik.

This is what Charles Oliveira is gonna see ringside when Islam Makhachev taps him out pic.twitter.com/VtC0BrGSGU

So it will be interesting to see how Hasbulla Magomedov behaves with Khabib by his side. Through his social media, Hasbulla has already issued warnings that Makhachev will run through Charles Oliveira. So having him being in Islam’s corner for the fight will be a neat sight for sure.

His appearance at UFC 280 will mark the first time Hasbulla attends a UFC event since signing a 5-year contract. In September, news broke that UFC has acquired the services of Hasbulla. Although some fans got excited about the prospect of seeing the Russian social media influencer inside the Octagon, it turned out that he would only serve as an ambassador.

He will apparently attend UFC events around the world and do media work for the company. It was smart for the UFC to sign Hasbulla as he has built up a massive fan following all across the world. It will help the UFC to reach new avenues and become even more popular amongst the masses. Even UFC President Dana White was talking about the plans for the next 6-7 years.

However, according to a report from Hasbulla’s recent visit to Australia, things did not go very well. Apparently, the Dagestan-born celebrity does not mingle with female audiences due to his social and cultural beliefs. So it remains to be seen if the partnership between UFC and Hasbulla is a productive one or not.