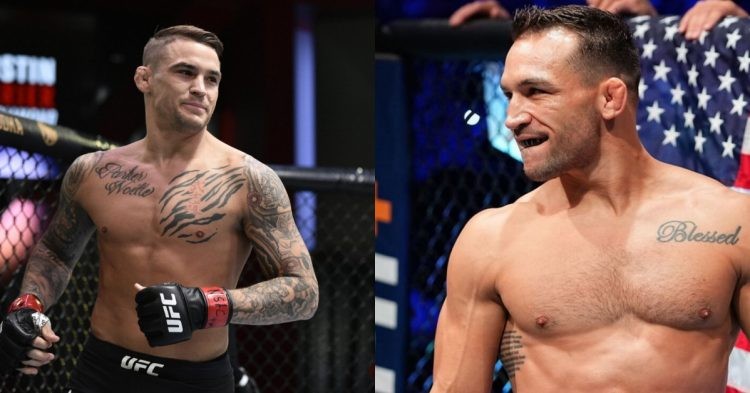 Michael Chandler is ready to rock Madison Square Garden (MSG) once again! There were reports that the UFC was looking to book Chandler against Dustin Poirier at UFC 281. But nothing was official until now. According to a report from ESPN, the contracts are signed and the bout is a go for UFC 281 on November 12th.

Fighting inside the MSG arena is always a special occasion for a fighter. Chandler has already fought in it once at UFC 268. His bout against Justin Gaethje at that event was truly a showstopper. Although Chandler lost the bout, he received a great ovation from the crowd. He then went on to fight Tony Ferguson at UFC 274 and got a spectacular front kick KO.

Dustin Poirier, on the other hand, took on Charles Oliveira at UFC 268 for the lightweight title. He was coming off two amazing stoppage wins over Conor McGregor. So it was expected that Dustin will run over Oliveira. Although he had a dominant first round, Poirier was submitted in the 4th round via then 155lbs champion Charles.

Poirier is the 2nd ranked fighter in the division while Chandler is in the 5th spot. So the victorious fighter may get a crack at the winner of Charles Oliveira vs Islam Makhachev at UFC 280.

The bout also has a lot of bad blood behind it as neither Dustin nor Michael like each other. They have been going at it since Chandler joined the company. But this came to a boiling point when they had an altercation during UFC 276.

Other than this, the card will also feature Israel Adesanya vs Alex Pereira for the middleweight title in the main event of the night.

Can Dustin Poirier withstand the power of Michael Chandler at UFC 281?

Dustin Poirier will be returning to the UFC Octagon after almost a year. Whereas Chandler has been the more active fighter recently. So Chandler will not have any ring rust, but the same can not be said about The Diamond. But the former lightweight champ is an elite opponent, so it may not be a factor in the fight after all.

One of Poirier’s biggest weapons will be his leg kicks. At UFC 257, Dustin immobilized Conor with leg kicks. Chandler also has a history of being susceptible to leg kicks. So Dustin’s kicks may be the biggest tool in his arsenal against Chandler.

But Chandler’s strong point is his power. He possesses an iron chin and a great pop behind his punches. Chandler’s strategy will be to corner Poirier and get him in a firefight. Poirier does his best work when he has the space to move. If Chandler cuts that off, he will definitely fancy his chances.

What are your thoughts on the fight? Do you think Dustin Poirier gets it done? Or Does Michael Chandler prevail at UFC 281? Let us know in the comments down below!