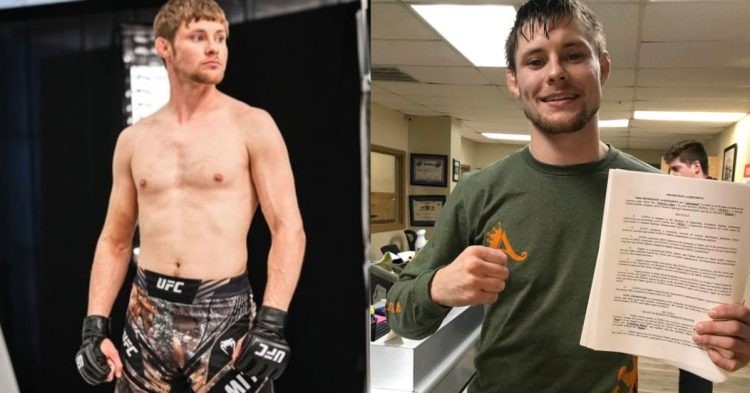 UFC prospect Bryce Mitchell is set to fight Ilia Topuria in a featherweight bout on the main card of UFC 282. Both fighters are very talented and undefeated in the promotion, which ensures that this bout is going to be a banger.

Mitchell won the bronze medal on Season 27 of TUF (The Ultimate Fighter) and has been climbing up the featherweight ladder. He is 6-0 in the UFC and the biggest win in his career came against Edson Barboza at UFC 272. However, Mitchell’s contract will expire after UFC 282.

Back in 2019, Mitchell posted on Twitter that he had signed a 4-fight deal with the promotion. After this, he fought Bobby Moffett at UFC Fight Night 148: Thompson vs. Pettis and grabbed a decision win. After that, Mitchell fought in two PPVs which are UFC 249 and UFC 272.

Mitchell was set to headline a UFC Fight Night event against Movsar Evloev but that was canceled later. ‘Thug Nasty’ is #9 in the featherweight division and is expected to get into the Top 5 list soon. It is expected that Mitchell will get a new contract which will probably get him a higher salary.

Can Bryce Mitchell beat the undefeated Ilia Topuria at UFC 282?

This weekend UFC 282 brings an electrifying matchup between two rising featherweights Mitchell (15-0) and Ilia Topuria (12-0). Both are undefeated in the promotion and coming off incredible victories.

After beating an elite fighter like Barboza, Mitchell had thought that he will get a fight against a Top 10 fighter but instead got Topuria, who is sitting at No.14 in the featherweight division. Mitchell got a decision win over Barboza, however, his performance was incredible.

On the other hand, Topuria is 4-0 in the UFC and three of his victories came through stoppages. He was also set to fight Barboza in a UFC Fight Night main event but that was later canceled. Topuria was set to fight Charles Jourdain but after missing weight, he got Jai Herbert in a lightweight bout.

Topuria got an incredible knockout win over Herbert and is now coming back in his natural division where he aims to derail Mitchell’s ascent. If he manages to beat Mitchell at UFC 282, he will get into the Top 10 featherweight list.