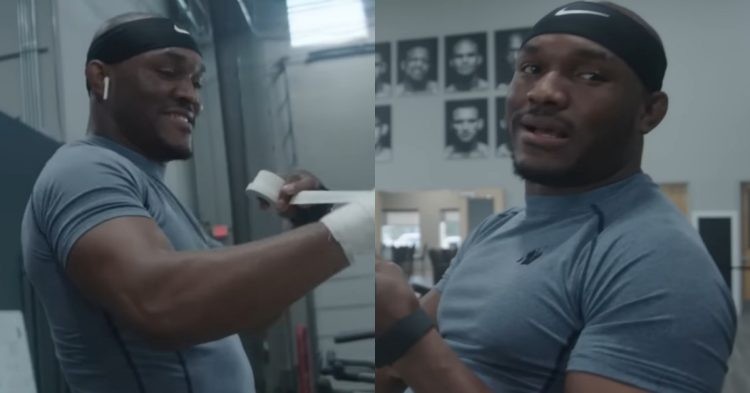 It looks like former UFC welterweight champ Kamaru Usman is back in training after his devastating loss to Leon Edwards at UFC 278.

In the second episode of the UFC 281 embedded series, the camera followed Michael Chandler to his gym, Kill Cliff MMA. There, fans caught a glimpse of Kamaru working under his former head coach Henri Hooft.

Regardless of his loss, The Nigerian Nightmare had an excellent performance at UFC 278. After a somewhat competitive round 1, Kamaru rag-dolled Leon for the next 3 and a half rounds. However, Leon landed a well-crafted head kick that knocked out Usman with less than 60 seconds to go in the bout. It was his first UFC loss and only the second career loss.

Will Harris of “The Anatomy of a Fighter” revealed that Usman’s loss had an impact on his bottom line as well. Apparently, Kamaru lost many sponsors after his defeat to Leon Edwards. Hence, it is good to see that the 35-year-old is training once again. In the comments section underneath the UFC-embedded video, fans stated their delight to witness Usman in the gym once again.

User MrDioXIII wrote “Good seeing Usman back in the gym, seemingly in high spirits after the loss. Know he’s with Wittman, but cool that he cross trains and comes in to help his old team with Hooft.” User DARKCLOUDNC wrote, “Usman will definitely win the trilogy and Leon will go back to being irrelevant at 170″. User Mr Stifler thought Leon’s win was a lucky one and wrote, “Usman knows he’s the best and the fight was a fluke win. He’s gonna be(beat) Leon in the 3rd and I’m willing to bet the house on it.”

Kamaru Usman handled the loss with grace. The cameras captured his reactions backstage immediately after the loss. He was understandably upset with the defeat, but he congratulated Leon for the win as well. He was somewhat happy with his display inside the Octagon leading upto the knockout. Now that he has had a lot of time to reflect on the loss, it will be interesting to see how he rectifies his mistake.

Usman is in a good mood as well. He spoke about having the chance to bounce back in an epic way after a dramatic loss. He also attended the recent Black Pather 2: Wakanda Forever premiere along with all the stars of the movie. it proves that Usman is a massive star and fans will tune in to see what he does next.

So what is next for the former 170lbs champ? There are strong indications that he will get an immediate rematch against Edwards. After UFC 278, Dana White revealed that he was looking for a venue in the UK for the rematch. It basically revealed which direction he wanted to go towards. Later, the current champ also confirmed to the media that Usman was the most likely option for his first title defence.

UFC earlier announced that Jiri Prochazka vs Glover Teixeira 2 will headline UFC 282, the last PPV of 2022. It means the trilogy bout between Edwards and Usman is likely to take place early next year in 2023. However, the promotion is yet to confirm a date or venue for the event.