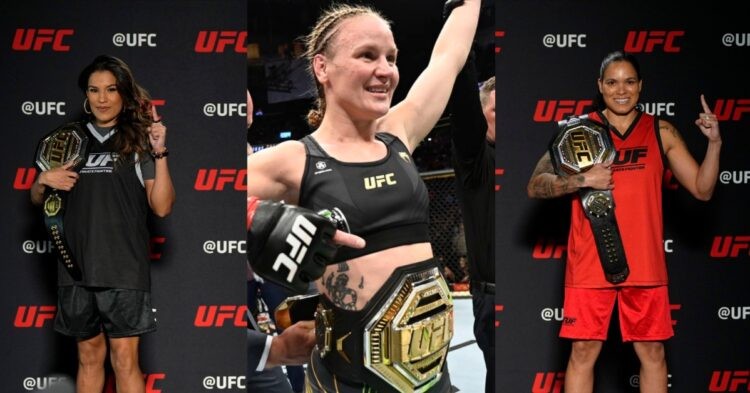 Valentina Shevchenko is confident about her chances against both Amanda Nunes and Julianna Pena. (Images via Twitter)

Valentina Shevchenko is not giving up on her dreams to become a UFC double champion. As a matter of fact, she is hopeful that it may happen much sooner than later. The current UFC Women’s Flyweight Champion is aiming for a bantamweight title shot by the end of the year.

The women’s 135lbs pound division is currently at standstill. Amanda Nunes, who is widely regarded as the greatest female Mixed Martial Artist of all time, lost her belt to Julianna Pena at UFC 269. The rematch is set for UFC 277 later in the year. Both Nunes and Pena are currently busy filming a season of The Ultimate Fighter.

The Bullet wants to fight the winner of Julianna Pena vs Amanda Nunes in the fall of this year itself. However, she is not taking her eye off the 125lbs division either. In a recent appearance on The MMA Hour, Shevchenko opened up about her future to Ariel Helwani. Talking about her immediate goals and the timeline for the bantamweight title fight, Valentina said,

“I think by the end of the year it’s going to be a good fight, But also we have to see — Miesha Tate is coming to 125 in July. So many things can happen, many things can change. So yeah, I think it’s possible. It’s very, very, very possible.” (h/t via MMA Fighting)

Perhaps in the MMA upset of the century, Amanda Nunes lost to Julianna Pena in the second round of their fight at UFC 269. Despite a good start to the contest, it was soon apparent that Amanda was lacking the cardio to take the fight deep into the latter rounds. Instead of showing her usual fight IQ to slow the proceedings down, Nunes opted to push the pace which eventually made her gas out.

Having fought Amanda Nunes twice, Valentina Shevchenko finally shared her thoughts on the fight between Nunes and Pena. She revealed that Amanda did not have the usual killer instinct that she usually has during her fights. Instead, the Brazilian almost seemed as if she was not taking the challenge seriously.

During her interview, the 34-year-old also reminded the fans that she possesses a victory over Julianna Pena as well. They previously fought in 2017. Shevchenko easily submitted her with an armbar in the second round to secure herself a Performance of the Night bonus as well.

As for her upcoming fight, Valentina Shevchenko is set to take on Taila Santos at UFC 275 next month. She has already defended the 125lbs belt 6 times since winning it in 2018. The Kyrgyzstani fighter has pretty much cleared out the entire division. Although she is looking forward to fighting Miesha Tate, the bigger fights are waiting for her 135lbs.