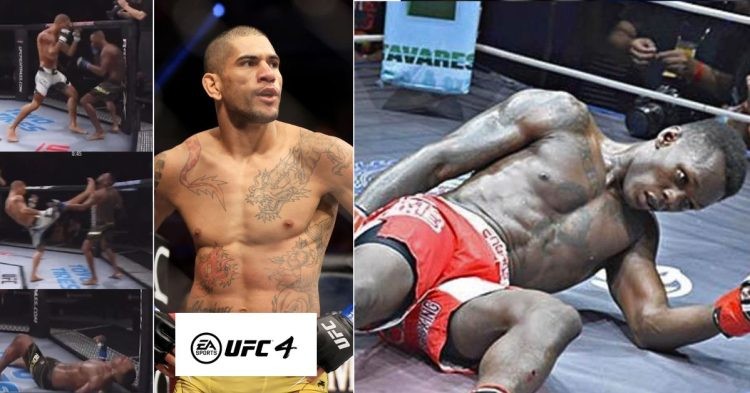 Alex Pereira will look to extend his winning streak against Israel Adesanya to 3-0 as he takes on the Middleweight Champion at UFC 281 inside Madison Square Garden, New York. The former kickboxing champion’s rise in the UFC has been nothing less than spectacular. He came into the UFC in November last year and will fight for the UFC gold in a little over one year with the promotion.

Pereira is currently 3-0 in his UFC career, picking up two stoppage wins over Andreas Michailidis and Sean Strickland, and another dominant decision win over Bruno Silva. Heading into UFC 281 title fight against Israel Adesanya, Pereira has left no stone unturned in taking a dig at the Middleweight Champion.

Earlier, Pereira had mocked Adesanya’s training methods by practicing with Tennis balls. Adesanya has Pereiera’s action reminds him of Paulo Costa’s antics ahead of the fight, and he believes the result will be the same come UFC 281.

This time around, Pereira went a step further as he ran a simulation of his fight against Israel Adesanya on UFC 4. The match-up ended with a dominant outing from Pereira who later viciously knocks out Izzy with a brutal front kick. “Even the video game already knows.” Pereira captioned the video.

Can Alex Pereira knock out Israel Adesanya at UFC 281?

Alex Pereira has done it before, so there’s no doubting the credibility of the Brazilian fighter. However, it will be easier said than done against Israel Adesanya who has improved leaps and bounds since he last fought against Poatan.

Additionally, the fact that it is a mixed martial arts bout and not a kickboxing fight favors the Champion. As seen from their last two fights, Pereira is not someone who can’t be touched. He gets tagged, eats shots, and relies heavily on his power shots more than his movements whenever he steps inside the ring.

That is something Adesanya will be able to exploit quite easily, and with MMA gloves, it could prove costly to Pereira. Be that as it may, the same can be said about Pereira, who will likely generate more power in the smaller gloves inside the Octagon.

It’s an exciting match-up and one that can go either way. Who do you think gets his hands raised at UFC 281? Do let us know in the comments section.