VIDEO: Glover Teixeira Made This Huge Mistake in Round 5 Against Jiri Prochazka at UFC 275 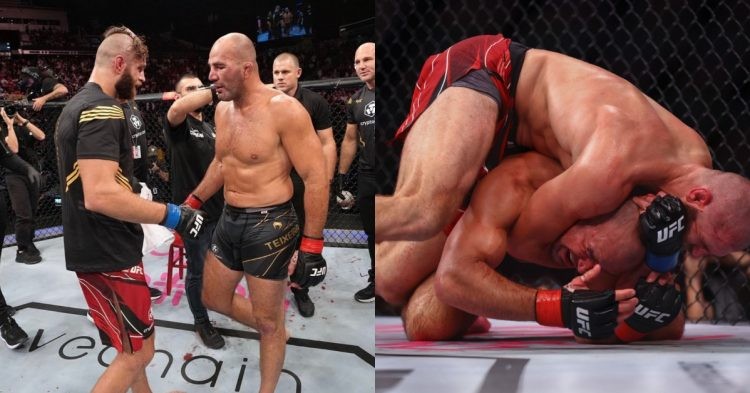 Glover Teixeira gets submitted by Jiri Prochazka at UFC 275. (Images via Twitter)

The UFC Light-Heavyweight division has a new king! Jiri Prochazka just submitted the champion Glover Teixeira to win in the main event of UFC 275. However, it was not an easy road to victory for the new champion. He had to put on the performance of his life to beat Glover.

Jiri Prochazka fought exactly the way fans thought he would. He was the one to put on the pressure on the feet as Glover took some time to get going. However, the champ soon figured out Jiri’s movement and got a takedown. That is when the fans were surprised to see how good Prochazka was in grappling.

But till the finish, it was the Brazilian who had the upper hand. He landed perhaps the better shots and Glover’s ‘ground and pound’ was vicious. He busted Jiri open with his brutal elbows on the ground. The 42-year-old mounted the Czech fighter multiple time and seemed to be coasting towards a decision victory. However, one wrong move cost him the fight.

What was Glover Teixeira’s mistake against Jiri Prochazka in round 5 at UFC 275?

Glover Teixeira is not regarded as the dominant striker during his fights. He is more of the fighter who lands a takedown and tries to dominate on the ground. But this fight shows that Glover is a very able striker who can hold his own against younger and more powerful strikers than him.

According to the stats, Glover landed 111 significant strikes out of an attempted 161. Whereas Jiri landed 120 out of 205. It shows that although Prochazka had more output, Teixeira was the more potent striker. Glover picked his shots beautifully and did much more damage in the fight than his opponent. However, he made a crucial mistake in round 5.

Right at the beginning of Round 5, Glover landed a massive right hook that almost knocked Jiri out on his feet. Getting excited by the sight, Glover followed it up with a couple of more punches. Just when Jiri was about to fall face-first on the mat, Glover tried to lock in a guillotine choke. But unfortunately for him, Jiri slipped out of the hold and landed on top of Teixeira.

It was the best chance of the night for Glover to end the night, but the wrong judgement call allowed the 29-year-old to survive the moment and recover. Prochazka then went on the submit Glover in the closing seconds of the fight.

The 15th undisputed champion in the history of the light heavyweight division: @Jiri_BJP 👑 #UFC275 pic.twitter.com/bxLV9JLfCb

Jiri Prochazka becomes the first fighter out of the Czech Republic to win a UFC title. It seems he will find himself matched-up Jan Blachowicz next. As for Glover, he stated that he will continue his career despite losing to Jiri.