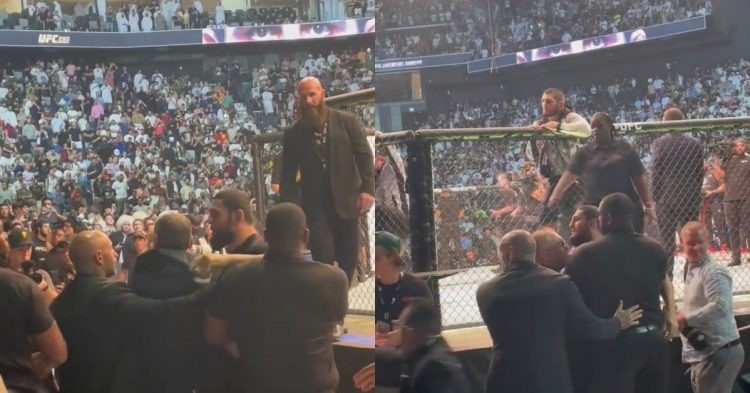 UFC 280 was a big success for the promotion. They had a sellout arena which had many big stars in attendance. The card was entertaining as well, with Petr Yan vs Sean O’Malley being the pick of the fights. In the main event, Islam Makhachev dominated Charles Oliveira to win the lightweight title. However, the night ended on a sour note as Khamzat Chimaev got into an altercation with Team Islam.

In a video circulating around the internet, it could be seen that UFC welterweight fighter, Khamzat Chimaev, was held back by the security staff at the arena. It is being reported that the scuffle took place after the event ended with Islam Makhachev coming out on top. Although RMC Sport Combat is reporting that the incident was between Islam’s team and Khamzat, there are some doubts.

In the video, Daniel Cormier could be heard interviewing the newly crowned champ. Also in the background, Khabib Nurmagomedov was seen lurking to find out what went wrong. If the brawl was actually between Chimaev and Islam’s camp, Khabib probably would not be standing as a spectator.

On the contrary, some fans speculated that Chimaev’s beef was with Khabib’s cousin Abubakar Nurmagomedov, who also fought at the event. So maybe Khabib was positioning himself to jump at his friend’s aid. However, nothing is clear at the moment and it is all speculation, as there is no official statement on the matter.

As the fans of The Borz have found out, he is a very short-tempered human being. He was pictured attending UFC 280 with Ramzan Kadyrov’s son beside him. There were recent rumours that he was unable to move out of Russia as his passport was seized by the authorities. But he then posted pictures with Ramzan and was seen sparring with his two sons.

Leading upto his last fight at UFC 279, Khamzat was involved in multiple backstage altercations. First, he fell out with middleweight fighter Paulo Costa at the UFC Performance Institute. Then, he had a big brawl with Kevin Holland which led to the UFC 279 press conference being cancelled. So he is no stranger to confrontations and the fans seem to see the funny side of it!

Khabib’s brother abubakar nurmagomedov has always challenged Khamzat on IG and now they meet 🤣🤣. but abubakar was lucky if the fighting had not been stopped he could have fainted there. but the strange thing is, why is Khabib only looking from the top of the cage?

Whole lotta nothing, khabib ready to do his jump kick if needed

I was expecting Khabib there to be an eagle again pic.twitter.com/pJ6JwOolrO

Recently, UFC President Dana White revealed that Chimaev may face Colby Covington next. What do you think of the alleged brawl between Khamzat Chimaev and Khabib Nurmagomedov’s team? Let us know in the comments down below.