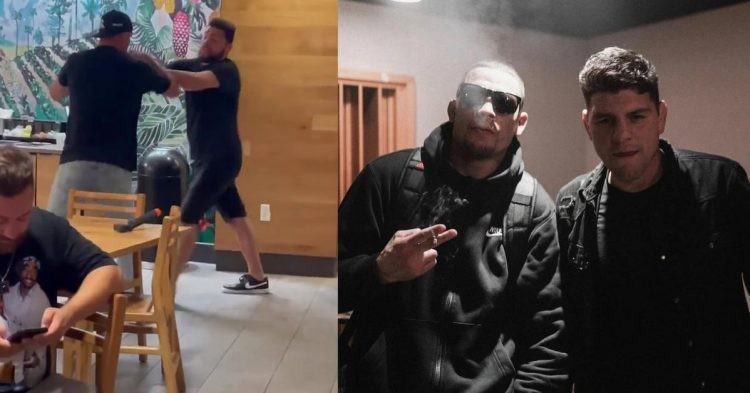 Nate Diaz who is all set to face Khamzat Chimaev this Saturday was seen sparring with his elder brother Nick inside a coffee shop just moments after the UFC 279 press conference was canceled due to a backstage brawl. Nick Diaz 39, who was last seen inside the octagon a year ago for his rematch against Robbie Lawler seems to have joined Nate and his team ahead of his last UFC contractual fight that will take place at the T Mobile Arena.

Following the fracas at the cancelled press conference Nick and Nate Diaz are grabbing a coffee in Starbucks and continue preparing for the Khamzat Chimaev fight ☕ #UFC279 (via @CesarGracieBJJ) pic.twitter.com/g2jIexUeKk

In the video which was shared by Chamatkar Sandhu, the Diaz brothers were looking in good spirits while throwing light punches at each other carrying on their preparations for the big fight this Saturday. Nick and Nate have always accompanied each other during their fights. Although it’s not clear whether we will see Nick Diaz back in the octagon for one more fight, he made a comeback after a 6-year layoff exactly twelve months ago. Nick did show flashes of his previous self in that fight but eventually suffered a TKO loss to Lawler in the third round of that five-round fight. Nate fighting his last UFC contractual fight and Nick nearing the 40-year mark, this Saturday could well be the last of the Diaz brothers we see inside the UFC octagon.

What happened between Khamzat Chimaev and Nate Diaz?

Due to an ugly backstage brawl, the UFC 279 press conference had to be canceled at the moment. The six fighters, Nate Diaz, Khamzat Chimaev, Tony Ferguson, Daniel Rodriguez, Li Jingliang, and Kevin Holland, were all supposed to be present for the presser but according to Dana White due to the backstage chaos they decided to go with two guys at a time and hence we saw Kevin Holland and Daniel Rodriguez come out to address the media but once they got finished the situation backstage worsened and the press conference had to be canceled. Dana White later said the UFC didn’t anticipate the kind of trouble that there happened to be, and said there was not enough security.

According to Kevin he “offered that clown (Chimaev) a beard trim”. Was this what started it all? We can’t be sure. White also gave a shout-out to former UFC fighter turned athlete manager Tiki Ghoshn, who was instrumental in making sure things didn’t escalate further: “If it wasn’t for Tiki, we would have been in trouble. Tiki took a couple for the team and he’s not even on the team. Tiki took a couple of water bottles to the head, a couple of slaps, and kicks. Thanks Tiki.”

UFC 279: Chimaev vs. Diaz is set to take place on Saturday (September 10) at the T-Mobile Arena in Las Vegas, Nevada.