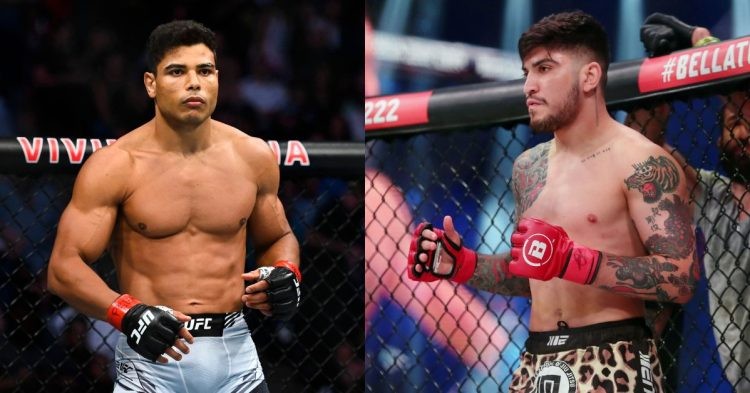 Paulo Costa and Dillion Danis is a friendship not many of us expected but it seems like UFC’s top middleweight contender is getting along well with the famous internet troll and MMA fighter Dillion ‘El Jefe’ Danis.

Now, in a recent video posted on Costa’s YouTube channel, Danis and Costa can be seen enjoying a few glasses of wine and then contesting in a grappling contest in the middle of NYC streets. Worth mentioning that Danis is widely known for his prominent BJJ skills, but in the video Danis can be seen getting tripped twice by a potentially intoxicated Paulo Costa. Take a look at it below.

We all remember the last time Costa got drunk and fought right? Costa himself confessed that he may have been a little drunk during his title fight against Israel Adesanya at UFC 253. He said “I was kind of drunk [when] I fought [Adesanya], maybe, on hangover, I couldn’t sleep because of the [leg] cramps. It was my mistake and I don’t blame anyone else, it was something I chose [to do], but, in order to try to sleep, because I had to sleep since I was awake for 24 hours, I had wine, too much wine, a bottle [of wine] to try to black out. I had a glass and didn’t work. Two glasses, it didn’t work. Half bottle, didn’t work. I had it all.”

Costa was last seen inside the octagon at UFC 278, where he squared off against the former middleweight champion Luke Rockhold. In a ‘Fight of the Night’ winning bout, Costa defeated Rockhold via unanimous decision. Danis on the other hand, who fights under Bellator MMA has only had two professional fights in his entire career(winning both by submission) and hasn’t stepped inside the cage for more than 3 years.

Why does the MMA Community Hate Dillion Danis?

Dillion Danis isn’t certainly a fan-favorite and often becomes the victim of online abuse. Although Danis is a bit of a troll himself, constantly abusing and insulting current and former UFC fighters through his social media. Danis is a BJJ black belt under Marcelo Garcia and at one point was considered to be the best upcoming grappler in the game. After Conor McGregor lost to Nate Diaz, he recruited Danis as his grappling coach.

Since joining McGregor and his team in 2016, Danis surely rose to fame but never got the love from the MMA community. He even got suspended from Marcelo Garcia’s Academy. Dillion Danis is 29 and hasn’t achieved anything significant in the sport. In fact, he’s known more for his exploits outside the cage than anything he has done in it. Victories inside the octagon seems to be the only thing that will get the MMA community to respect Dillion Danis but it doesn’t seem like happening anytime soon.