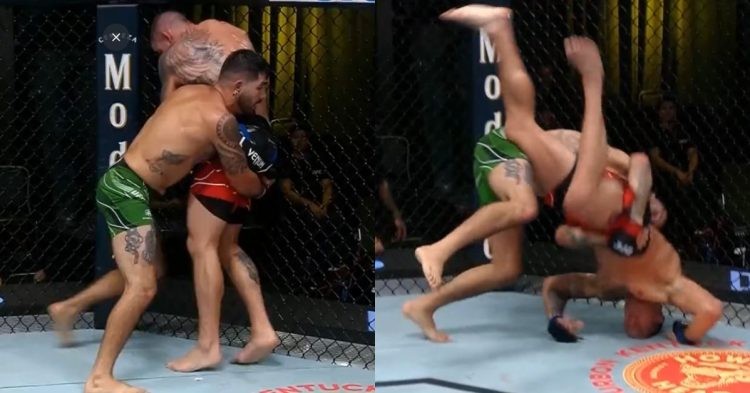 Anthony Hernandez showed his utter dominance in the octagon when he stopped veteran fighter Marc-Andre Barriault via third-round submission at UFC Fight Night.

But the reason Anthony put the middleweight division on notice was the way he slammed Barriault on his head which looks like that damaged the cage flooring, something we have never seen before.

This could have been indeed a career-ending move and even though from the video it looks horrendous, seems like Barriault walked away with no significant injury. The impact of this fight was shining through the fight fans.

“He walked away from it but an impact like that has to have some, at the very least, cumulative damage for his career. Next time he gets an injury to that area something minor may become major.”

While another fan commented:

“I thought spinal cord injury instantly. It was close! Glad he was ok!”

Dude just got dumped on his head so hard in the UFC he actually damaged the cage flooring! I have literally NEVER seen that EVER!!! #UFCVegas60 #UFC #Fluffy pic.twitter.com/DJfbwwNONd

Hernandez is a former LFA champion and now 4-2 as a member of the UFC’s middleweight division with three equally-impressive submission finishes. He is truly one of the best grapplers in the promotion today and with a dominant win like this, Anthony could surely land in the top 15.

Anthony Hernandez wins his third fight in a row in the UFC, as he impressed the crowd with his sheer dominance in grappling and with that phenomenal head slam, before eventually choking out Barriault in the 4th roundth-round.

Both of the fighters looked pretty impressive in the early rounds when they started the fight with an electrifying performance. Barriault looked amazing when he was throwing powerful strikes, but Hernandez was also precise in countering with hard punches.

After a while Hernandez eventually turned to his grappling, even though Barriault did a good job avoiding too much damage, the fight saw many successful attempts at clinching from both fighters.

However, Hernandez was able to secure a takedown as he was relentless in punishing Barriault with punches. The veteran, Barraiult found his shot and tagged Hernandez with a couple of hard.

In the 4th round, Anthony dumped Barriault directly on his head as the fighters went crashing down to the canvas. Hernandez continued to punish Barriault before finally latching onto the head and arm choke.

With three consecutive wins now on his resume, Hernandez said he wants to keep moving up at 185 pounds.

“I don’t really follow UFC, I just show up and fight,” Hernandez said in his post-fight interview with Daniel Cormier.

“I don’t give a f*ck who I fight. I think I’m the best in the world and I’m here to prove it one fight at a time.”

With that choke, Hernandez put Barriault to sleep, as he continues to improve with each fight and hopes to find an opponent from the top contender’s list.