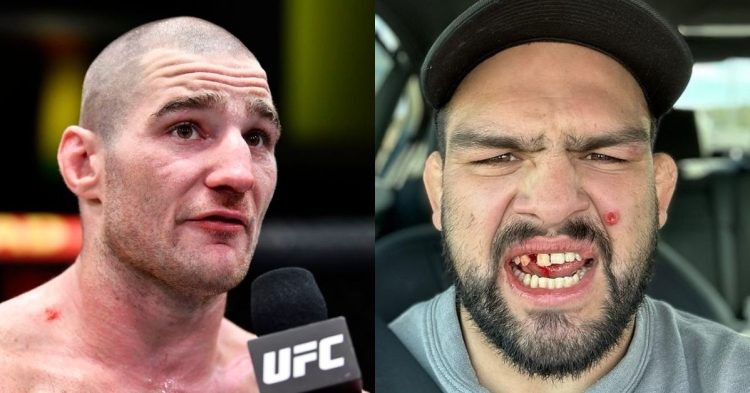 Kelvin Gastelum will be replaced by Sean Strickland At UFC Vegas 67. (Credits: Twitter)

Kelvin Gastelum is out of the upcoming UFC Vegas 67 headliner and Sean Strickland will be making a quick return as a short notice replacement.

As reported by ESPN, Kelvin has withdrawn from his five-round middleweight bout against Nassourdine Imavov on Saturday in Las Vegas. Moreover, Sean Strickland, who is on a two-fight losing streak, agreed to replace Gastelum and will face Imavov in the five-round, 205-pound main event.

Unfortunately, Kelvin has suffered yet another setback, this time in the form of a brutal mouth injury. In the meantime, we expect Strickland and Imavov to kick off the new year with some fireworks.  Although Strickland lost a controversial split decision at UFC Vegas 66, he will be determined to get back to winning ways.

On the other hand, Nassourdine Imavov will enter this fight with a three-fight win streak. Previously, the Russian-born Frenchman took a unanimous decision over Joaquin Buckley in September. Notably, Imavov was initially scheduled to take on Gastelum in April, but visa issues spoiled the party.

UFC Vegas 67 will take place at the Apex facility in Las Vegas, NV. Aside from the revised middleweight main event, the card will also feature a featherweight bout between Dan ’50k’ Ige & Damon Jackson. Additionally, a women’s bantamweight fight between Ketlen Vieira and Raquel Pennington is also one to watch out for.

Kelvin Gastelum UFC career has been cursed with injuries

Following the news of his pull out from UFC Vegas 67, Gastelum has issued a statement. Taking to Twitter, Kelvin released his first statement after withdrawing from the bout. In his message, the former UFC title contender apologized to Imavov, the promotion, as well as his fans for missing the fight.

I’m extremely disappointed to say the least. This not how I wanted to start 2023.
I worked my ass off & battled through a lot of adversary and was ready to put on a hell of a show this weekend.
I apologize to Imavov, his camp as well as @ufc and all the fans. #OnAmission4Gold

Previously, Gastelum was in action in a decision loss to Jared Cannonier in August 2021. Moreover, the defeat was a big one, setting him back to 1-5 in his last six fights. Notably, he previously lost to difficult opposition, in the likes of Robert Whittaker, and Israel Adesanya among others.

Currently, it is unknown how long it will take Gastelum to fully recover from this mouth injury. Following his statement, Gastelum also released a gruesome video of his teeth getting stitched back together. Kelvin’s career has been riddled with injuries, as a result of which, he was out of the octagon for the entirety of last year.

With a long road to recovery likely ahead of him, and with the losses also piling up, Gastelum will need to be at his best when he returns. Although many doubt the 31-year-old could once again reach his peak, there is still a lot left to come from him. When will Gastelum finally make his return? Will he be as good as before? Leave your thoughts in the comments below.