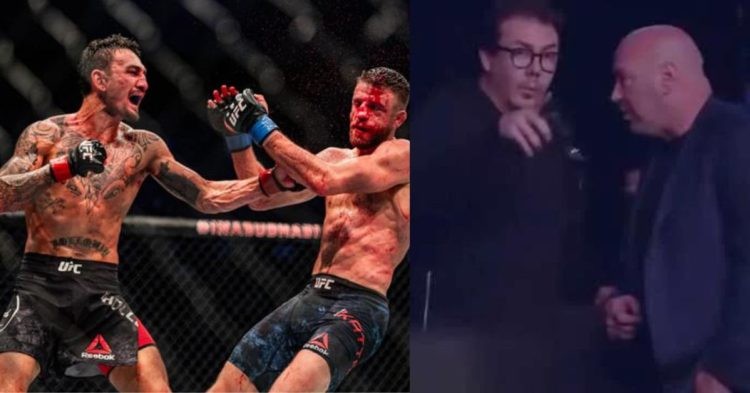 Calvin Kattar is set to face Arnold Allen in the main event of this weekend’s UFC Fight Night. Kattar left no doubt that along with being a great striker; he is one of the toughest fighters. Against Max Holloway, Kattar took so much punishment that even UFC president Dana White showed concern.

According to White, referee Herb Dean should’ve stopped the fight earlier but the fight went the distance. Holloway walked away with a decision win but White thinks the fight should’ve ended in the 4th round. At that time White said:

“He took so much fu***ng punishment in this fight, I’m freaking out a little bit, man. I don’t like it,” White said of Kattar at the time.

“This reminds me of the kind of fight where the fight’s over, and then he walks in the back and fu***ng dies. I think that fu***ng Herb Dean should’ve stopped it in the fourth round. He was wobbling all over the fu***ng place. He should have stopped the fight right there,” Dana added.

While White’s statement shows his concern over the fighters, UFC veteran Dan Hardy thinks otherwise. Recently, Hardy talked about this and believes that Dana’s show of concern was just a publicity stunt. Hardy said the clip of White talking to Hunter Campbell about Kattar’s health was staged that’s why he was set up with a microphone.

Meanwhile, Kattar did not have much problem after that fight. He bounced back with an impressive decision win over Giga Chikadze in the next fight. On the other hand, Allen is also a very tough prospect as his dominant performance was on display against Dan Hooker. Either way, this fight will be a battle of two brawlers who are both tough as a nail.

During the UFC 280 post-fight pressure, Dana White was asked about this. The UFC president straight up denied the accusations and had some hard words for Hardy.

Later White said that he was mic’d for a documentary film. White said: “I can tell you this: we never staged anything, ever. We have a documentary that we filmed during COVID. That’s why I was mic’d.”

The UFC president brought up the reason why Hardy was fired. He also said that Hardy is going after him because he is “bitter.”

“And I definitely don’t give a f**k what Dan Hardy thinks. Dan Hardy is a guy that was mistreating a woman who worked here. That’s why he was fired. So obviously, he’s bitter. And I’m assuming that’s why he would say something like that,” Dana added.

Hardy was allegedly fired from the promotion last year as he was involved in an incident where he mistreated a female employee. Later Hardy claimed that the reason why he treated the alleged employee was that she was “being obstructive.”