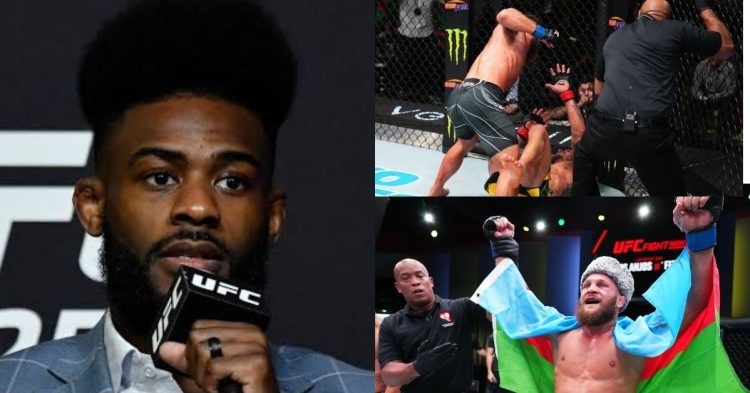 Rafael Fiziev produced a stunning left hook from the bag in the fifth round to knockout Rafael Dos Anjos in the main event of UFC Vegas 58. Consequently, with this big win, Ataman has successfully extended his winning streak to six wins and ranks fourth in the longest active list of wins amongst the lightweights.

Speaking about the finish, the entire sequence from the Azerbaijani lightweight was picture perfect as he feinted RDA with a flying knee and landed a killer left hook to finish the bout. Consequently, several fighters from the UFC reacted to this knockout and shared their opinions on Fiziev.

Amongst these reactions, current UFC bantamweight champion Aljamain Sterling offered an interesting take about how the fight should have continued for a bit longer. According to him the referee should have given RDA more time as he felt that the former lightweight champion would recover.

Marks usually one of the better refs but that stoppage was way too quick. Tough break. Wish we got to see if RDA could recover. Rough ending to a great fight. #UFCVegas58

Idk. I feel like fighters go limp all the time and “come-to” really quick. It’s a fight, isn’t it? Take some and give some.

I do think RDA was hurt BAD, but I kinda wanted to see “if” he could recover or not. That’s the game we play tho. Game of inches. Great win Fiziev!

Several fans on Twitter blasted Aljamain Sterling for making this argument and agreed with the referee’s decision to stop the fight. Do let us know in the comments section your thoughts about Fiziev’s win at UFC Vegas 58.

At first look it may appear that the referee made a mistake by stopping the fight but after watching the replays, most fans would agree that if the fight would have continued further then it would be bad for RDA. Moreover, Sean Marks would have been heavily criticized by fans because Fiziev was in a great top position and would have inflicted a lot of damage to Dos Anjos.

In the end, it was a terrific matchup and Rafael Fiziev just exceeded the expectations of fight fans and announced his arrival into the top ranks of the UFC. Subsequently, it would be interesting to see who the matchmakers decide to pit him against next.