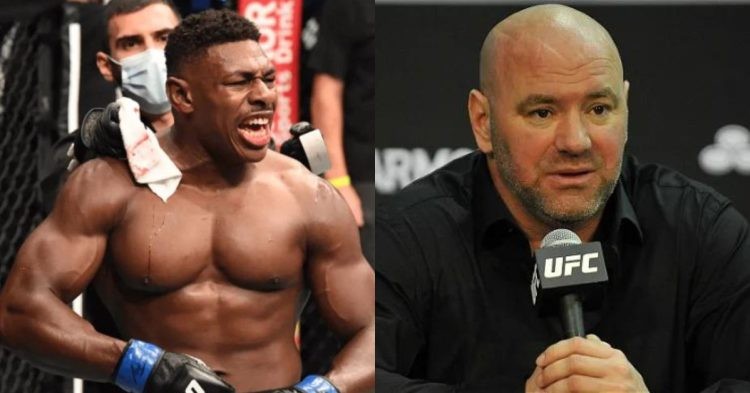 UFC President Dana White was in complete awe of Joaquin Buckley after his sensation KO win over Impa Kasanganay at UFC Fight Island 5. Buckley put up an impressive performance and a knockout that fight fans will remember for years to come.

Buckley took on Impa Kasanganay in the middleweight division and emerged victorious in the second round of the fight with a brutal KO win. Buckley looked impressive and set-up the head kick really well. While the first kick was defended by Impa by his hands, Kasanganay pushed Buckey away. However, Buckley was quick to spin and connect a back kick of Kasanganay’s face visibly turned his eyeballs in. Kasanganay fell flat on his back and with a stoppage in the second minute of the second round.

Many UFC fighters including UFC commentator Joe Rogan took to social media expressing both their shock and delight at the brutal KO. UFC President Dana White was so impressed that he personally took the opportunity to congratulate Joaquin Buckley.

Earlier, several UFC fighters including the likes of Middleweight Champion Israel Adesanya took to Twitter to congratulate Joaquin Buckley with the $50k price to his name after the Performance of the Night outing.

Paul Felder also looked extremely shocked at the KO as he stated, “This is the greatest KO I have ever seen.”

The spectacular KO grabbed the attention of some of the most prominent names in the UFC. Welterweight contender Nate Diaz looked visibly impressed while Justin Gaethje claimed, “Wow we just witnessed the best KO of 2020.” Not to forget Gaethje’s compliment must be surreal for Joaquin Buckley as Gaethje is seen as one of the fiercest strikers in the UFC.

Cory Sandhangen upset former Bantamweight champion, Marlon Moraes, with a brilliant finish. Sandhagen picked up a stoppage victory after he connected a spinning wheel kick followed by a barrage punches. With the loss, it looks like Marlon Moraes might not be getting his title opportunity after all.

What Went Wrong For Marlon Moraes Against Cory Sandhagen?