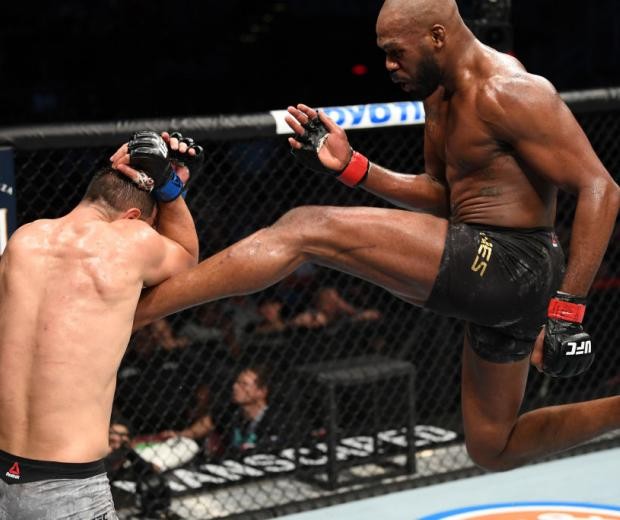 Whenever there’s a debate on ‘Best UFC Performers’, it is inevitable that the name Jon Jones will make it on the top of that list. Jones has put up quite a resume as a performer inside the cage.

Bones became the youngest champion in UFC history with his title victory over Maurício Rua at age 23. He holds many UFC records in the light heavyweight division, including the most title defenses, most wins, longest win streak, and most submission victories.

Read More: “He Has No Shame Anymore”- Colby Covington Explains Why Tyron Woodley Will Take a Dive Against Jake Paul

Jon Jones is only getting better

Jones is currently training to make his comeback and debut in the heavyweight division and start the ‘second-half’ of his career, Jones’ striking Coach Brandon Gibson says that people are yet to witness the most dangerous side of Jones.

“Jon has been the most dominant champion in UFC history. He has the record for titles but, man, this goal [of becoming heavyweight champion] has sparked a fire in all of us. Whether it comes in a few months, or comes in a year-plus, Jon’s 33. I feel like he’s not even in his heavyweight prime yet. We’re taking our time, we’re doing this right.”

“He’s had great success in his 20s, a great run at light heavyweight, but Jon not only have that focus of being a heavyweight champion with this huge task in front of us, but also his commitment to himself as a professional athlete, I think we have yet to see the most dangerous Jon Jones there is.” Gibson stated.

Jones’ Diet for His Heavyweight Physique

Regardless of when Bones finally makes his return inside the cage, Jones is making sure that he qualifies the weight criteria before entering the heavyweight division. With the aid of bodybuilding guru Stan Efferding, Jones is bigger than ever. Efferding, a professional bodybuilder powerlifter, is the mastermind behind the Vertical Diet.

The Vertical Diet places a heavy emphasis on easy-to-digest, high-calorie foods such as grass-fed beef, chicken, salmon, eggs, milk, yogurt, and low FODMAP(fermentable oligosaccharides, disaccharides, monosaccharides and polyols) fruits and vegetables are a type of carbohydrate known for causing trouble for the small intestine. Symptoms of over-indulging in FODMAPs include cramping, flatulence, and indigestion.