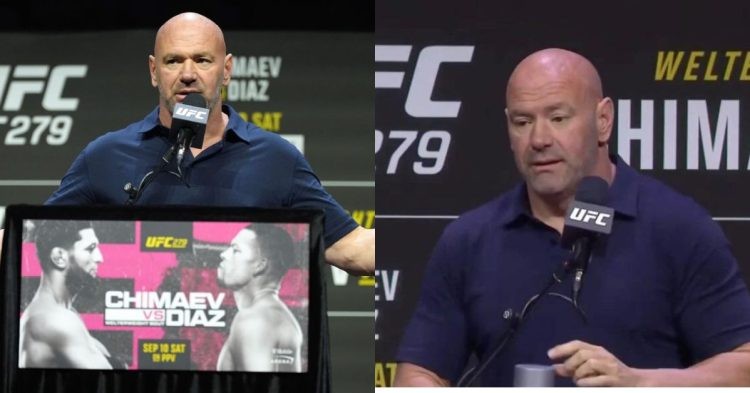 Without warning or justification, the press conference in Las Vegas began more than 30 minutes late. UFC president Dana White finally broke the silence by saying, “Absolute s***show back there.”  There was a brawl between opposing groups that White subsequently acknowledged started between Khamzat Chimaev and Kevin Holland.

Water bottles were reportedly hurled during the press conference after Chimaev apparently fought with Holland and then again with Nate Diaz’s side. The UFC president also disclosed that the backstage crews for Khamzat Chimaev and Nate Diaz each included over 100 personnel.

In the post-fight interview, he stated, “Let me start off by saying I am not going to tell everybody what went on” He then expressed that something like this has been unprecedented in the organisation. He added, “In my 22 years we never had an Incident like this today, but we’ll be ready for it next time.

Why Dana White was forced to cancel UFC 279 press conference?

The press conference was planned in advance of UFC 279 on Saturday, which features a welterweight matchup between Khamzat Chimaev and Nate Diaz, a former UFC Lightweight Championship contender.

An confrontation took place between Chimaev and Kevin Holland, who is fighting on the undercard, as White later revealed to reporters off-camera. But the conflict didn’t end there.

Numerous accounts claim that other athletes and their respective camps also became involved in the altercation. Although no injuries have been reported, Ariel Helwani, a veteran MMA beat reporter, claims that punches, kicks, and even objects have been thrown.

The event will still go place on Saturday at T-Mobile Arena in Las Vegas. Also using social media, Chimaev posted, “I told them not to play with us. Kevin and Nate got what they deserved”

During press conferences, the fight promotion employs a “skeleton staff,” but in the future, additional security will be added. One can only hope that such an event does not take place in the future.