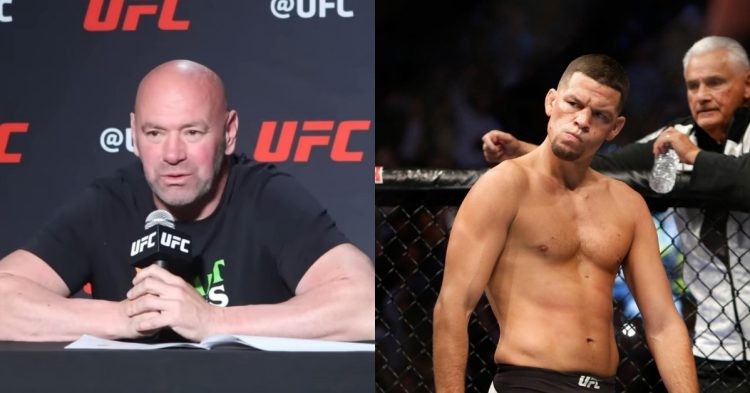 Nate Diaz will most likely step inside the Octagon one last time this Saturday. Diaz has one fight left in his contract and that bout is set to take place on September 10th at UFC 279 against Khamzat Chimaev. Ahead of it, Nate spilt the beans on an altercation that took place a few years ago between him and Dana White.

In a recent press conference ahead of the big PPV event this weekend, the UFC President was asked about the incident. However, in true Dana White fashion, he refused to answer it and smiled. Dana neither confirmed nor denied that the physical altercation ever took place. He used the word “allegedly” when asked about the validity of Nate’s claims.

“Allegedly, allegedly. We were drinking.” After getting asked if things were close to being violent or not, Dana smiled and replied, “Does anybody else have any other questions?”

As mentioned before, Nate Diaz has repeatedly hinted toward his exit leading upto the Khamzat Chimaev fight. However, in the past few days, things have started to look better. Nate’s teammate and long-time friend, Jake Shields, stated that Nate is a massive superstar at the moment. If Dana White offers him the appropriate amount of money, Nate will definitely contemplate staying.

Even Nate himself spoke on the matter and expressed his wish to finish his trilogy bout against Conor McGregor before parting ways with the UFC. However, it does not look like Dana is too keen on going out of his way to keep Nate with the company.

The 53-year-old previously stated that Nate is on the decline and he does not add the same value to the brand that he used to. He also stated that a bout against Jake Paul in the boxing ring would serve Nate better. Although those comments were made months ago, White has not changed his mind since.

“I don’t know (If this will be Nate’s last fight in the UFC or not). I mean Nate and I talked you know. And I said listen, You know this kid came in on The Ultimate fighter, he has fought incredible wars for us and he’s been a big part of this company for a very long time and what more could I ask of Nate Diaz? If Nate’s ready to make this his last fight, I wish him all the best in the world.”

Dana got quite nostalgic after that and revealed that it was always fun to work with Nate and Nick Diaz. It may have been hectic at times, but it was always fun. He also added that every fighter has to face the day when they are out of the UFC. But it does not look like White holds any grudges against Nate.

What do you think of this situation? Do you think Nate Diaz is ready to move on from the UFC? If he does, do you think it is the best decision for him personally and professionally? Let us know in the comments down below.