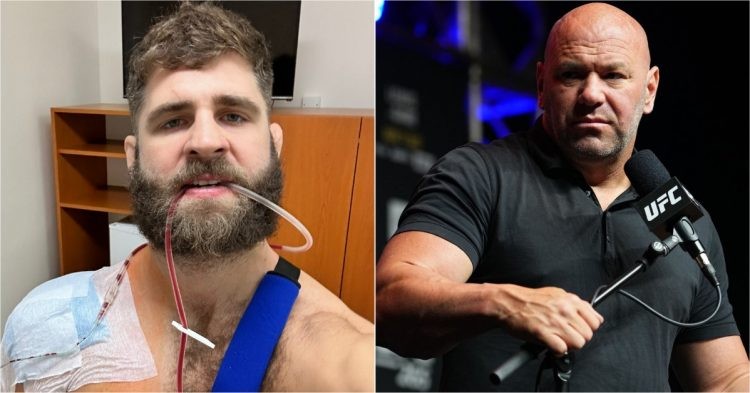 UFC 282 will feature Jan Blachowicz vs Magomed Anakalev for the vacant light heavyweight title. However, the bout was put together at the last possible moment after Jiri Prochazka suffered a brutal shoulder injury. As a result, the champ vacated the belt and wanted the division to move on. Although Dana White initially praised Jiri for his honorable move, he is not a fan of how Jiri handled the situation.

After the news broke, Jiri let the fans know that he was disappointed about the whole situation. He had his shoulder surgery recently and it looks like he will have a long recovery period before he gains full fitness. The UFC President previously revealed that the injury was perhaps the worst one that the company ever encountered. But. there was no information on how the injury occurred.

UFC later announced that Russian fighter Magomed Ankalaev will get the chance to fight for the vacant title against Blachowicz. Apparently, UFC wanted Glover Teixeira to fight Ankalaev for the vacant belt. But, once Glover turned it down, the company secured the services of Jan Blachowicz.

So fans may ask, how did Jiri get injured? Dana White revealed the answer recently.

Dana White reveals how Jiri Prochazka got injured ahead of 282

During his recent appearance in Paddy Pimblett’s podcast, the 53-year-old finally shed some light on the issue. As per Dana White, the injury took place during Prochazka’s fight camp. He was set to rematch Glover Teixeira at this weekend’s PPV. However, Jiri Prochazka apparently dislocated his shoulder during a training session. But, the injury turned worse when some of his gym members allegedly tried to put it back in.

“What happened was it popped out and he had some guys there at the gym [try to put it back in socket] and it f*ckin ripped the sh*t out of it and destroyed his shoulder… I’ll tell you, tell him, tell all the fighters, if anything happens to you, jump in a f*ckin car and go to the hospital. We will pay for everything. People think that these guys at the gym can fix your shoulder, do this sh*t, do that sh*t, don’t even risk it. Just go to the hospital. It’s crazy.” (h/t via parrypunch)

Dana White’s statements make it clear that the lack of medical care is the reason for the severity of the injury. Prochazka’s decision to not seek medical care ultimately backfired on him. Although the injury still could have prevented Jiri Prochazka from fighting this weekend, the injury perhaps would not have been as severe with adequet treatment. Shoulder injuries can have a big impact on a fighter’s mobility.

The most recent example is the former UFC bantamweight champ, TJ Dillashaw. He fought Aljamain Sterling in the co-main event of UFC 280 for the bantamweight belt. However, the bout was extremely onesided as Dillashaw dislocated his shoulder within the first few moments. After the bout TJ revealed that his shoulder dislocated about 20 times during his fight camp!

But, instead of taking the time off, TJ Dillashaw decided to move forward with the bout and it led to his early retirement. Hence, Dana wants his fighters to let the doctors do their job. He does not want the fighters to take matters into their own hands.

What do you make of Dana White’s recent comments? Do you think Jiri Prochazka should have waited for the doctors to treat him? Let us know in the comments down below.