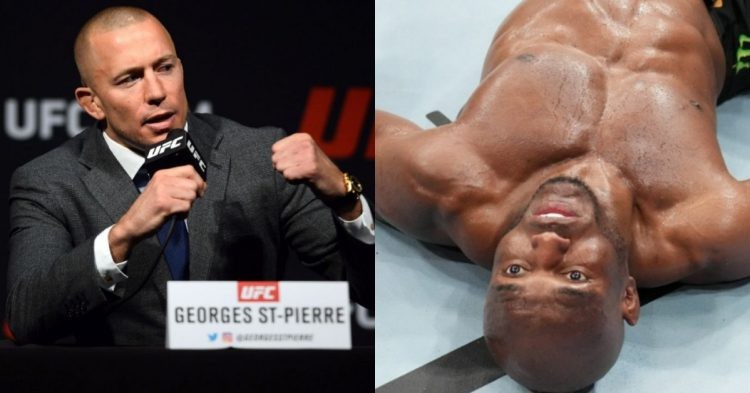 Georges St-Pierre, who is hailed as one of the greatest UFC fighters ever, has finally shared his thoughts on Leon Edwards beating Kamaru Usman at UFC 278. GSP thinks Kamaru’s ability to regain the belt will depend on self-belief!

Fans witnessed an upset of a lifetime at the last PPV as Edwards defeated Usman with a head kick which was heard around the world. Nobody would argue against the notion that Kamaru Usman was just 50 seconds away from winning the bout at the event in Salt Lake City.

But Leon’s coaches directed him to land a head kick which they had practised over and over again during their training camp. Usman had a knack for titling his head while trying to avoid punches. So Leon faked a punch to make Usman move his head and landed a magnificent kick which flatlined Usman.

During a recent Q/A with the fans ahead of UFC Paris, GSP had his say on Kamaru Usman. Known for having great insight into the sport, Georges St-Pierre elaborated that confidence is the key to Usman’s redemption.

“So for the magic to happen, they the skills and the confidence. So we’ll see how mentally strong is Kamaru Usman and if he comes back and wins the title, I think it’ll add up to his legacy.”

However, the job is not going to be easy, as GSP himself mentioned, confidence can transform a fighter. Beating Usman in the way that he did, definitely will give Leon Edwards more confidence. So the trilogy is going to be a fascinating one to behold.

Is Kamaru Usman still on track to dethrone Georges St-Pierre as the welterweight GOAT?

Kamaru Usman was on the verge of finishing his 6th consecutive title defence at UFC 278. He was agonisingly close to getting the job done before being separated from consciousness. It just goes to show that The Nigerian Nightmare is very much in his prime and a moment of madness caused him the fight.

Georges St-Pierre is a two-time UFC welterweight champion. He got the belt after beating Matt Hughes at UFC 65 for the first time. But he was unable to defend it as he lost it to Matt Serra in the following fight.

But he was able to regain it at UFC 83 by beating Serra in the rematch. After that, he went on a magnificent win streak which saw him defending the belt 9 times in a row.

Hence, the loss means that Kamaru matching GSP’s 9 consecutive title defence is out of the question. However, he can equal the number or even surpass it in two reigns as champion. But it all depends on what happens in the trilogy fight between Kamaru Usman and Leon Edwards in 2023. So Usman can still dethrone GSP as the greatest ever UFC welterweight fighter.