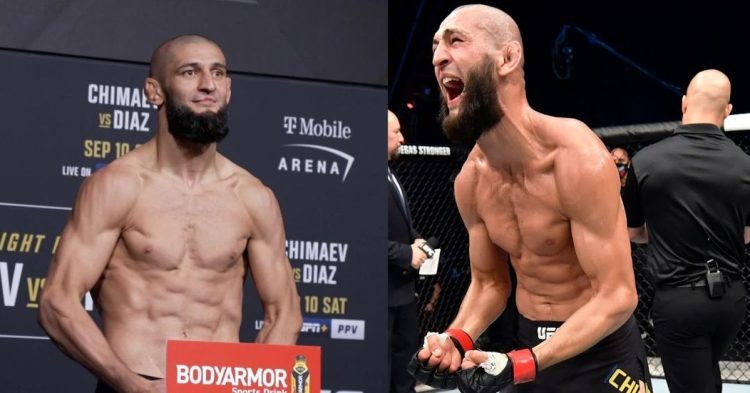 Khamzat Chimaev had an eventful last week. Before his last bout at UFC 279, he had an aggressive verbal tussle with Paulo Costa at UFC P.I. Then, he had an altercation with Kevin Holland and the Diaz brothers before the press conference of UFC 279 which eventually led to the press conference being called off. Just to top it all off, he missed weight by 7 pounds which led to his bout against Nate Diaz being called off.

By rearranging the six competitors in the top three fights, organisers were able to save the card, and Chimaev eventually faced Kevin Holland in the co-main event.

Chimaev defeated Holland through first-round submission in the bout, but he now must decide if he will be able to stay under the 170-pound weight limit.

In a recent interview with his head coach, he was asked whether or not he will be able to make weight in future and compete at welterweight.

He stated, “He’s missed weight this time, but it’s not as if he’s been missing weight all the time. Of course, he’s been having a hard time making weight, but he’s always made weight. The point of the thing is that we’re going to make it easier and fight at middleweight some of the fights, but we’re game for welterweight as well.”

He later elbaorated on the stated of Khamzat during cutting the weight. He added, “He was getting muscle spasms, shaking, vomiting, when he stood up, he was passing out. I was worried about him.”

Missing weight is no noble virtue. In the MMA world, any fighter who misses weight, even by a small margin is criticised heavily. In this case, Khamzat missed weight by whole 7 pounds. Naturally, he was bound to recevie heavy flack. Despite his strong victory over Kevin Holland, Chimaev (12-0 MMA, 6-0 UFC) is still mostly discussed in relation to what transpired at the weigh-ins on Friday rather than Saturday’s UFC 279 event.

The UFC fighter failed to make weight for their fight against Nate Diaz, the welterweight main event. Chimaev’s 7.5-pound weight-infraction forced the cancellation of his bout with Diaz and caused a reordering of the top three fights on the card, leading to the Holland-Chimaev contest.

Dana White is aware that the UFC will need to continue keeping a careful eye on that scenario. In the post fight interview, he stated, “Yeah, it’s a problem, it’s a problem that he missed weight. We have to look at it and figure it out, but what makes sense is for him to fight at (185). So we’ll see.”

At the press conference, White said that he had not yet spoken to Chimaev and that they had not discussed the weight miss.