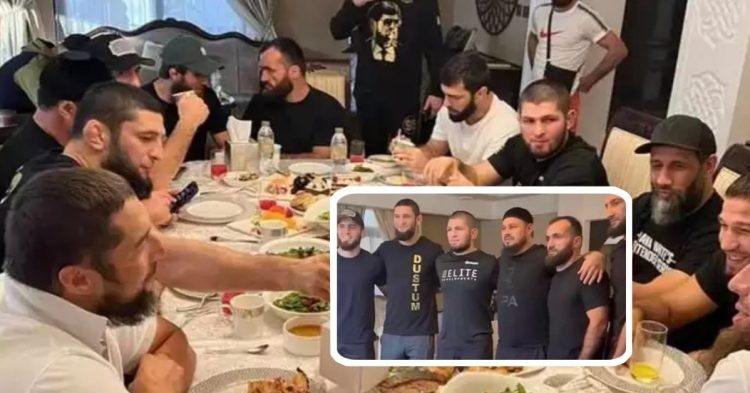 It looks like all is well between Khamzat Chimaev and Khabib Nurmagomedov, as they have settled all their differences.

The atmosphere inside the arena was magnificent, after Islam Makhachev’s triumphant victory over Charles Oliveira at UFC 280. But the mood soured after videos emerged of Khamzat Chimaev brawling with one of Islam’s teammates. The incident took some of the thunder away from Islam’s title win. It clearly bothered Khabib Nurmagomedov, who was a bystander during the scuffle.

Although it was initially unknown who Chimaev was targeting, it was later reported that he was going after Abubakar Nurmagomedov. But fortunately, things did not get out of hand, thanks to the security personnel present in the arena. In the latest development, it looks like Khamzat’s close ally, Ramzan Kadyrov has stepped in and has played a crucial role in ending the beef.

What did Khabib Nurmagomedov say about the brawl at UFC 280?

Following that, a video surfaced where Khabib Nurmagomedov was seen standing alongside Khamzat, Islam, and Abubakar, where he issued an apology to the fans. According to him, scuffles between the two camps have created a bad impression on the spectators. The Eagle wants all of them to work together in harmony and be successful in the sport.

“What happened yesterday, does not show us well. Neither me nor Khamzat nor Abubakar. To tell the truth, we’re tired of this nonsense. Here we are gathered together as brothers, talked to each other and we apologized to each other. Hugged and inshallah, I hope that in the future the, we will only gather and fight for good reasons. That was today, Islam won, yes, the belt at first. The next one is very close is gonna be Khamzat.”

“And Khamzat, let us all get together. So when Khamzat wins the belt, it’s not for the showing off, not for this conversation that we’re going to celebrate. We will celebrate for our new champion inshallah. May God help you us. I hope so that this is our sad moment right here which turned out to be that it will never happen to anyone else again.”

Both Khabib and Khamzat Chimaev have a history of engaging in altercations. Nurmagomedov started the infamous UFC 229 melee after beating Conor McGregor to defend his lightweight title. On the other hand, Chimaev was partly responsible for getting the UFC 279 press conference canceled, as he started a brawl against Kevin Holland.

For a significant period of time, it appeared that Khamzat Chimaev would fight Paulo Costa next. However, with Costa fighting Robert Whittaker at UFC 284, that possibility is out of the window. Prior to his UFC 273 fight against Gilbert Burns, UFC President Dana White expressed his wish to see The Borz going up against Colby Covington.

Obviously, it did not happen as UFC booked him to fight Nate Diaz. But the interest in the fight seems to have reignited as Dana recently confirmed to a reporter, that he would book the contest. There is no doubt that Chimaev would cherish the opportunity to fight the two-time UFC welterweight title contender. But, the question is, would Covington accept the bout?

Khamzat himself confirmed that his next fight would be at middleweight. However, if he was to fight Covington, it would most certainly be at the 170lbs division. After missing weight by 7.5lbs for his last fight, can The Borz actually make the cut to welterweight? Only time will tell!