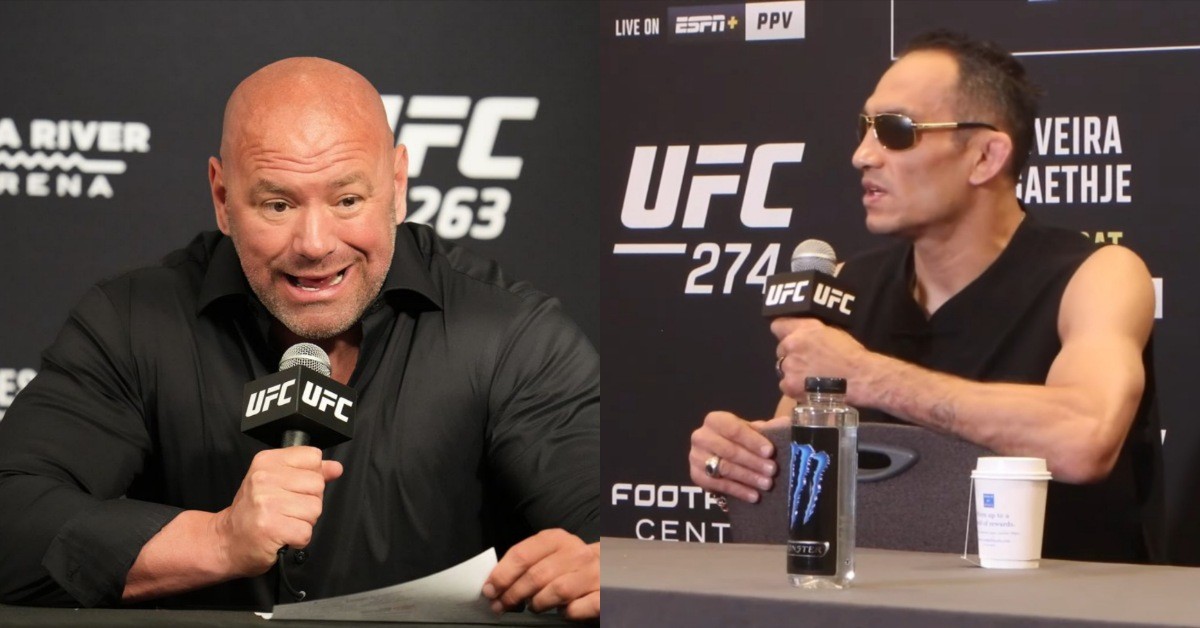 Tony Ferguson comments on lack of freedom while working with Dana White. (Images via Twitter and The MacLife YouTube channel.)

Is Tony Ferguson looking for a way out of the UFC? In a recent press conference, the lightweight fighter revealed that he wanted to jump to boxing previously. But the UFC president Dana White apparently denied him the opportunity.

The former UFC Interim 155lbs Champion is going through the worst patch of his career. With 3 straight losses, Tony will be desperate for a win against Michael Chandler this weekend at UFC 274. He even plans to revert back to wrestling against Chandler. However, this fight may not be what Ferguson originally wanted.

During the UFC 274 media scrum, Tony stated that he did not want to focus his athletic talents just on Mixed Martial Arts (MMA). He named several sports that he wanted to be a part of. However, the most shocking revelation came when Tony said that he wanted to try his hand at boxing. The 38-year-old also reaffirmed the notion that UFC fighters are not paid enough. He said,

“I think we’re underpaid personally. I’m gonna be real, I’m not gonna say too much. Dana said something the other day… talked about how boxers are overpaid. I asked Dana to box. He said ‘f**k no!’ I’m like ‘why?'”

Tony further went on to say that he wants to play baseball and football. He even mentioned pro wrestling. Tony brought up Brock Lesnar who was his coach during ‘The Ultimate Fighter,’ and is currently wrestling for WWE. Hence Ferguson does not appreciate Dana’s restrictions on fighters who are under contract.

He also touched on the topic of insurance. Dana White once teased that long-term health insurance may be a possibility in future. However, he soon took back his comments and stated it was nothing but a mistake.

Is Tony Ferguson leaving the UFC?

Tony Ferguson hinted toward trying out the waters of free agency. He was asked if this was the last fight on his agreement or not. In answer to that, Ferguson replied that he still has a good number of fights left. But he may just run down his contract instead of looking to negotiate a new one. El Cucuy revealed,

“Nah! I got a bunch (of fights left) man. I’m gonna be real, I’m willing to be able to fight it out, to go out there and not be held under.”

Ferguson was visibly angry about the lack of freedom he has in the promotion. UFC fighters are not allowed to engage in any other combat sports activities unless permitted otherwise. El Cucuy compared it to being in business with a ‘drug dealer.’ Targeting Dana White, Tony said,

“Like I said, the promoters here, they act like drug dealers sometimes. They just throw up on a couple of bucks here and there and you’re like, ”come here kid, here, take this.'”

Tony Ferguson is still under contract with the UFC by his own admission. Hence, it is not likely that he can step into a boxing ring anytime soon. Tony’s dreams of becoming a boxer may not come true until he either gets released or Dana finally changes his mind.