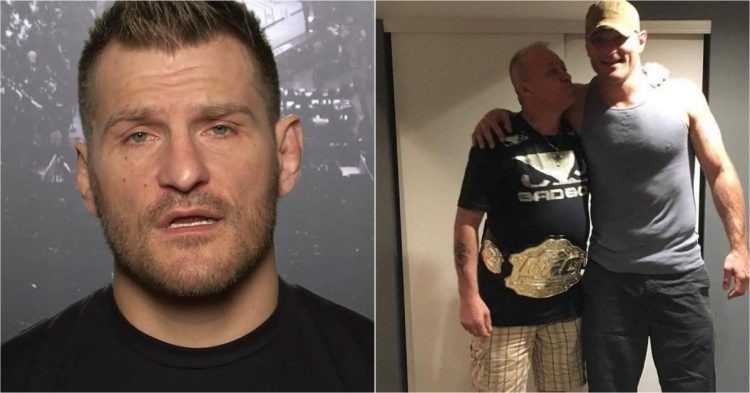 Stipe is a very down-to-earth human being and his dedication to his friends and family members is very well known. Hence the loss of his father is an extremely emotional moment for Miocic. He revealed in his post that he was unsure whether to share the sad news with the fans or not. But he wanted to let the world know how amazing his father was and wrote a beautiful message.

“This took a little bit to write this, I didn’t want to post about it, but I want everyone to know… my father passed away this past Sunday and I appreciate all of the text, calls and prayers. Dad you were a boisterous, stubborn, opinionated, “told everyone how you felt” kinda guy.. which I definitely got from you haha.. in the same breath, you were the most soft, gentle loving man (got that from you as well). You cared for others and fiercely protected your family… I appreciate having you for the 40 years I’ve been alive. You may have been half way across the world, but you were always there.”

“Just talking with you & you making sure you showed the kids your cat on FaceTime (even though I was trying to have a serious convo with you) were the best memories… I know your up there, being difficult Ofcourse.. so you can be comfortable & watch over us… we love you so much, B, Danielle, Jelica, the kids (aydin, meelah, mateo) Ryan & myself… thank you for being you. Your kids wouldn’t be who they are today if it weren’t for you… I don’t like sharing personal things on social media, but it’s important to remember & celebrate his life and what a wonderful man he was…Rest in peace and I know you’ll be watching over us. Love you Dad.”

Bojan Miocic previously had a bout with cancer. But he went into remission in 2019. After Miocic beat Daniel Cormier at UFC 241, Stipe received a congratulatory video call from his father. In a heartwarming moment, he also broke the news to Stipe that he was cancer free. Stipe, fresh off the big win, was delighted to hear the news. At this moment, there is no news on the cause of Bojan Miocic’s death.

Stipe Miocic’s father Bojan Miocic was a Croatian immigrant. Although he stayed in America after his parent’s divorce, Stipe remained in touch with his father and shared a great bond with him. He alluded to the fact that he spent a lot of time away from his father, but Bojan’s influence made him a better man in life. He also stated that all of his family members are grieving the loss alongside him.

As far as his career is concerned, Stipe Miocic has not competed since his KO loss to Francis Ngannou at UFC 260. After that, Miocic took a long break and focused on his family life. But recently, Miocic shared the footage of his training sessions and he looked to be in amazing shape. He was also in the running to be Jon Jones’ opponent for his heavyweight debut.

But, the latest reports are suggesting that Jon will either fight Francis Ngannou or Curtis Blaydes at UFC 285 next year. So that leaves Stipe without a big-name opponent. Will he ever return to the UFC? Only time will tell.