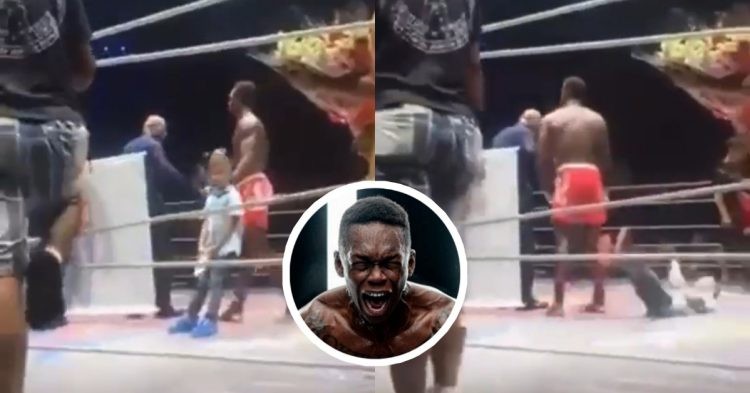 Alex Pereira has the upper hand on Israel Adesanya heading into the UFC 281 fight week. Not only does Alex have two precious wins over Adesanya, but Poatan is also winning the mental battle ahead of their much-talked-about fight this weekend. Pereira trolled Adesanya by mocking his Elsa comment and making fun of his training methods.

However, Alex is not the only member of the Pereira family to have a go at the UFC middleweight champ. It is very well known that the 35-year-old took on Israel Adesanya twice in a kickboxing ring. There was a lot of controversy about the result of the first fight as Adesanya felt he was robbed of a win in 2016. But he got the chance to even the score the following year in 2017.

For the first two rounds, Adesanya was cruising towards a comfortable win. But, Pereira worked his magic and landed the perfect left hook to KO Israel Adesanya. It took Izzy quite some time to regain consciousness. Once he was fully awake and getting ready for the announcer to read out the result, something very humorous happened. Alex’s son mimicked Izzy’s drop to the canvas right to his face!

Falei antes para não deixar subir no ringue 😂(meu filho Alessandro após eu nocautear o Adesanya). I told them before not to let him in the ring 😂(my son Alessandro after I knocked Adesanya out). pic.twitter.com/xsa8jaySWR

After the footage resurfaced, Alex Pereira identified the child as his son Alessandro. Although he did not apologize for his son’s actions, he revealed that he asked his team to stop his son from entering the ring after the bout. Despite such a disrespectful act, The Last Stylebender kept his cool.

What does Israel Adesanya have to say about Alex Pereira’s son mocking his loss?

Israel Adesanya never fails to see the funny side of the scenario. Although his humour does not work on the fans every time, Adesanya is quite a witty guy. Hence, he did not mind Alex’s son’s gesture. Instead of getting offended, apparently, the Kiwi fighter laughed off the scenario. He told the story during his most recent appearance on the MMA Hour podcast.

Alex Pereira’s son mocking Izzy by pretending to be knocked out pic.twitter.com/BjkZB4Ls0d

The bout took place over 5 years ago. It was evident from the footage that Alex Pereira’s son was significantly younger. Perhaps Adesanya would have reacted in another fashion if any of Alex’s teammates did that. However, Adesanya was graceful in defeat and decided to restrain his emotions at the time and allowed Alex to have his moment.

But Adesanya will have the perfect chance to make Alex Pereira pay for the incident. Out of all 3 of their fights, the bout this weekend will have the biggest fanfare. Adesanya is much further ahead in terms of MMA skills than Pereira. If Izzy beats the 35-year-old this Saturday, it will vindicate him to an extent.

Do you think it was a disrespectful act from team Alex Pereira? Let us know your thoughts on the matter in the comments down below.