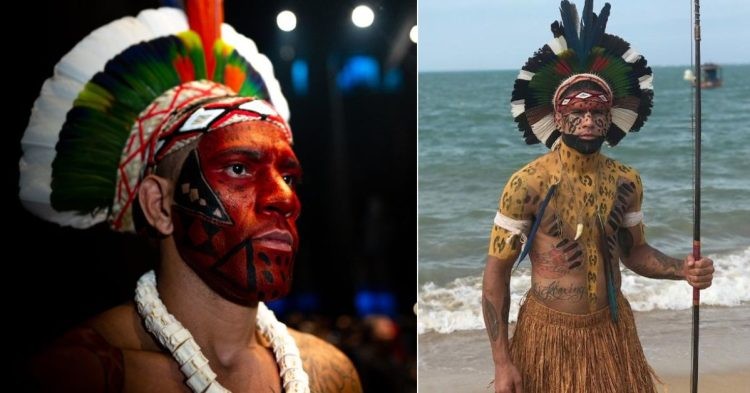 Alex Pereira is a dangerous human being! The former Glory kickboxer is widely regarded as one of the scariest individuals in the world of combat sports. Ahead of UFC 281 title fight against Israel Adesanya, Pereira appeared with a face-paint for the face-off during UFC 281 Ceremonial Weigh-Ins. Needless to say, this has the UFC pondering.

Alex Pereira’s face paint during UFC 281 face-off with Israel Adesanya reflects his indigenous roots. Pereira has revealed that he belongs to an indigenous group of people in Brazil, and is “100% Brazilian.” If you are wondering why he gestures to shoot an arrow during his UFC walkouts, it is in honor of his indigenous culture.

“When I first started to train in kickboxing, my first teacher had indigenous roots. I went home the same day and asked my mom. She said my grandparents were indigenous.”

“It made me feel more confident. We wanted to resurrect my origins and indigenous culture. I made a ritual with the bow and arrow. Then a sequence with the indigenous music and that’s how it started.”

Alex Pereira looks to use the UFC as a platform to spread awareness about his culture and use it as a medium to help the indigenous people of his native land.

Alex Pereira religion and ethnicity: All you need to know

Alex Pereira converted to Islam back in 2015. While there’s no statement from Pereira regarding the same, a video of Pereira with the FAMBRAS director reciting the Shahada, an oath, or a declaration of faith in Islam. There are reports that he left Islam and may have converted to the faith to fight his addiction to alcohol. There’s no clarity to this as of today.

Alex Pereira goes by the nickname Poatan, which is in the Tupi-Guarani language, meaning Hand of Stone. Tupi is one of the largest groups of Indigenous Brazilians. While Guarani people are related to Tupi, linguistic differences set them apart.

“It’s very important to preserve the indigenous people who are sometimes a little forgotten.” Pereira has said.

“My father was a hard-working man but he never told me about this. Later he told me that my ancestors were warriors. I use that as motivation. My ancestors were the first inhabitants of Brazil with little resources and managed to survive.” Pereira has revealed.

Alex Pereira belongs to the Tupi people of indigenous Brazilians. Pereira speaks Portuguese, and his walkout ritual of bow-arrow reflects his culture and ethnicity. Even the tattoos on Alex Pereira signify his indigenous roots. Pereira’s ancestors were one of the first inhabitants of Brazil.