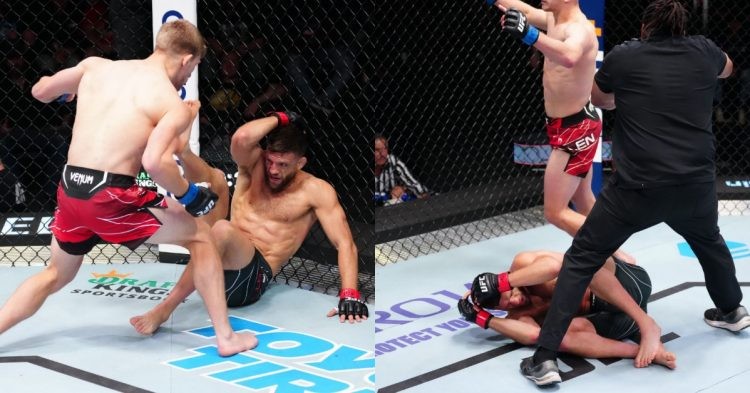 5th-ranked UFC featherweight fighter Calvin Kattar took on 6th-ranked Arnold Allen. In his last fight, Kattar lost to Josh Emmett in a close fight. Arnold Allen, on the other hand, beat Dan Hooker in a firefight at UFC London earlier this year. So who came out victorious between two strikers at UFC Vegas 63? Let’s find out.

The fight started out with both fighters taking their time to settle in. Although they landed a few shots here and there, neither fighter landed anything big. But, the bout was heating up in the last couple of minutes. Both Arnold and Kattar started opening up more and more. However, in the final few seconds of the first round, Kattar suffered a knee injury.

The Boston native went for a jumping kick to end round 1. Unfortunately for him, he landed in a bad position, which blew out his knee. But Calvin did not give up and finished the round. It looked like he was recovering and was ready to start the second round. But, Kattar could not put any pressure on the knee and collapsed in the Octagon.

An unfortunate end to our main event.

It will go down as a TKO for @ArnoldBFA after Calvin Kattar suffers a knee injury #UFCVegas63 pic.twitter.com/zK78tswtDB

The referee Herb Dean stopped the fight at the 0:08 minute mark of the second round. To Allen’s credit, he did not follow up with any punches when he saw an injured Calvin Kattar on the mat. With the win, he continues his winning streak to 10 fights in a row.

With this loss, Kattar is now 1-3 in his last 4 fights. Although fans will have to wait for official reports on his injury, the signs were not very positive. For now, he maintains a position inside the Top 5 in UFC featherweight rankings. But, Kattar may see himself dropping down very soon.

Fans online reacted to the incident and wished the 34-year-old luck in his recovery process. The champ Alexander Volkanovski also chimed in with his thoughts.

@Arnoldbfa was looking great, Not the ending he wanted but was all class about it. Wishing @CalvinKattara speedy recovery. #UFCVegas63

Congrats on the win @Arnoldbfa! @CalvinKattar is a dawg and pillar in the @ufc #UFCVegas63

Exciting contenders like Bryce Mitchell and Movsar Evloev are coming through the ranks rapidly. In his post-fight interview with Michael Bisping, Allen demanded an interim title shot, which he may very well get. Alexander Volkanovski has his sights set on the lightweight champ Islam Makhachev. So the 145lbs weight class is heading in an exciting direction.