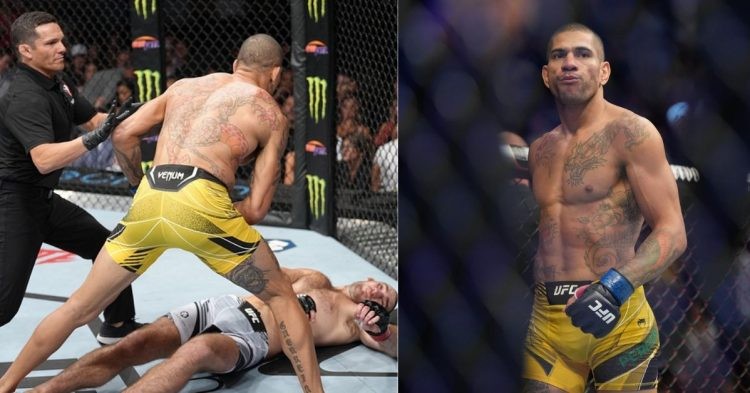 Alex Pereira’s nickname “Poatan” is a combination of two words, Po as in “Hand” and Atan meaning “Stone”, and hence Poatan stands for “Hand of Stone” in the indigenous language Tupi-Guarani. Needless to say, the nickname translated to his monstrous knockout power.

Alex Pereira is widely regarded as one of the greatest athletes in the world of combat sports. After a tenured career in the world of kickboxing where Pereira became a two-division champion, the Brazilian fighter made his UFC debut back in November of 2021.

Pereira was feared for his brutal left hand that has seen him dismantle 21 of the 40 opponents he has fought in his kickboxing career. He was ranked #1 in the kickboxing middleweight and light-heavyweight division back in 2021. And now he has taken the same skillset and had added more weapons to his arsenal for the UFC.

How powerful is Alex Pereira?

Alex Pereira is not the most technical fighter. However, the power that he carries in his hands is next to none. Moreover, he is not just a power puncher and has a great skillset to trouble the most elite kickboxer. Multiple wins over the likes of Israel Adesanya, a stoppage win over Jason Wilnis, and a close decision victory over Artem Vakhitov are all testimony to his greatness as a seasoned kickboxer.

UFC commentator described Alex Pereira as a “scary” individual. “That dude is different. He’s scary, that dude has nuclear power. He’s got crazy power. Even when he was over in glory I was a big fan of his over in kickboxing he was fu***g  everybody up in two different weight classes over there. 205 he was knocking people dead. That dude is terrifying.” Rogan has said about Poatan.

From flying knees to brutal left hand and vicious uppercuts, Alex Pereira is a force to be reckoned with in the world of combat sports. The power that he is able to generate with his left hand without really loading his punch is absolutely riveting! It’s quite surprising to learn that Poatan started training in kickboxing when he was 22 years old.

Pereira, who was an alcoholic growing up switched to combat sports to fight his alcohol addiction. More than a decade later, he is arguably the greatest combat sports athlete of all time.