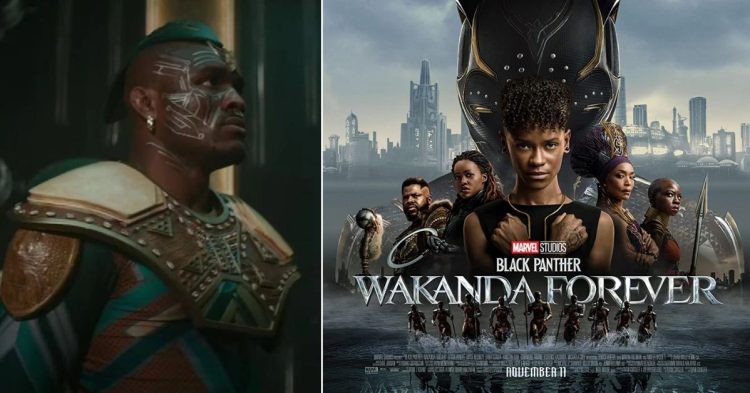 Kamaru Usman is the former UFC welterweight champion. After winning the title in 2019, Usman became one of the biggest stars in the company. Prior to his loss against Leon Edwards at UFC 278, Usman was just one win away from equalling Anderson Silva’s win streak of 16 fights.

During his run as a champ, Usman accomplished a lot of big feats, but perhaps securing a role in Black Panther 2 was one of the biggest moments of his career.

The sequel to the record-breaking first Black Panther movie comes out on November 11th. The film received positive reviews in general. According to Variety, the movie is projected to earn $175 million on its opening weekend. But, other trades are even reporting that the movie may make upwards of $200 million in its first three days at the domestic box office.

Only 6 other Marvel movies had weekend box office in excess of $200 million before. Hence, Black Panther 2: Wakanda Forever will be in an elite club if it manages to do the same. Fans are curious to see how the filmmakers handle Chadwick Boseman’s tragic passing in the movie as he was the actor to portray the titular character. So what role does Kamaru Usman have in the movie? Let’s find out!

Not a lot of actors can say that they made their debut in the sequel to an Oscar-nominated movie. However, Kamaru Usman is a lucky man as he gets to introduce himself to Hollywood in such a high-profile flick. But it looks like his role was not an extensive one. Currently, the entertainment website IMDB lists Kamaru’s character as a “naval officer.”

Other than him, the main cast includes Letitia Wright as “Shuri,” Angela Bassett as “Ramonda,” Lupita Nyong’o as “Nakia” and Winston Duke as “M’Baku.” Tenoch Huerta will also make his MCU debut as “Namor.” Just like its predecessor, Black Panther 2: Wakanda Forever also had Ryan Coogler as the director. So Kamaru Usman is surrounded by A-list celebrities and he is thankful for the opportunity.

“It was an emotional journey for all those actors and actresses that were there on set because, and I wasn’t around for the first movie, but being a part of the second one you got to see how much he meant to the movie and how much he actually had his hands in the making of the movie,” said Usman.

Fans recently had a glimpse of The Nigerian Nightmare in the lead-up to the upcoming UFC PPV. His former teammate Michael Chandler will fight Dustin Poirier at UFC 281 and Kamaru made a brief appearance in one of the embedded videos for the event. It seemed like Usman was hard at work for his trilogy bout against Leon Edwards. By the looks of it, the bout will take place sometime early in 2023.

Who Is James Krause’s Wife Shynel Krause? All You Need to Know About UFC Fighter’s Family