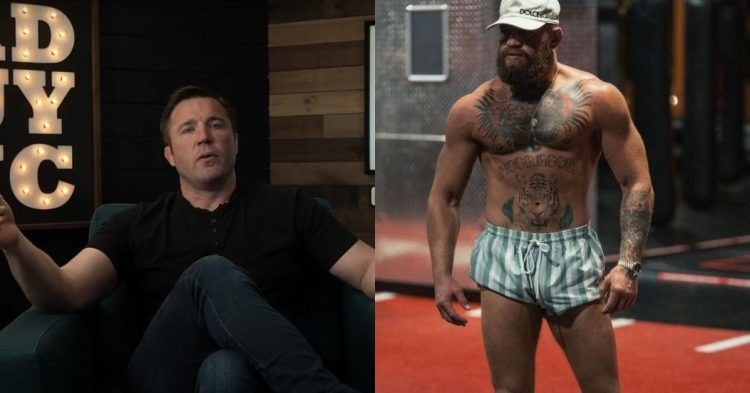 UFC veteran Chael Sonnen gives his take on the most important question that is being asked about Conor McGregor right now – When will Conor return to action? As per some sources, McGregor is out of the USADA testing pool and has been accused of using steroids.

Sonnen talked about the accusations regarding him using steroids and his possible timeframe to return to the Octagon. Earlier, it was reported that Conor will fight at the start of the next year, possibly for a title fight; either in the lightweight or welterweight division.

Talking about Conor and the drug accusations, Chael said:

“Why is he out of the USADA testing pool? Why is the guy who’s clearly gotten bigger is accused on all of the internet – which runs our industry, of being on steroids?”

Chael went on and addressed the accusations, clarifying that Conor is not on steroids. Sonnen added:

“He’s flexing and beefing out in pictures, why would he get out of the pool? Now I’ll share with you right now and my eye test is … 100 percent, Conor McGregor is not on steroids.”

According to Sonnen, McGregor is not training like he normally used to and due to this Conor is “bloated and full of water.” However, recently Conor has bulked up, and looking at his enormous physique many have wondered if the Irishman is on steroids.

To make matter worse, from some sources, it has been known that Conor is out of the testing pool. This means now he will have to wait at least four to six months to make his return, according to Sonnen.

Will Conor McGregor fight for the title on his UFC return in 2023?

Conor McGregor is currently getting in peak shape as he is set for his Hollywood debut co-starring alongside Jake Gyllenhaal in the new remake of “Road House.” However, it is a hot topic in the MMA community currently regarding McGregor’s comeback.

Recently, it was confirmed that Conor will fight in the next year; however, no opponent was announced. Some fighters were supposedly potential opponents for Conor. But now looking at the situation, it seems it will take longer now for Conor to go through the tests and re-enter the USADA test pool.

As stated by Sonnen, Conor is not in a place like he used to be before. With his bulked-up frame and Hollywood debut, it will be hard to imagine seeing McGregor show up for a fight on short notice.

‘The Notorious’ has been out of action since suffering a career-threatening leg injury in his trilogy against Dustin Poirier at UFC 264. So a comeback fight against Poirier might be a possibility. Also, a fight against Michael Chandler would be a sellout, as Chandler has already called out the Irishman before.

Apart from that, Sonnen thinks that Conor could fight in a title fight at lightweight or welterweight, but it is highly unlikely now, as he has to go through the testing process again and it will take quite a long time. And looking at his shape, it might not be possible for Conor to make weight on short notice.