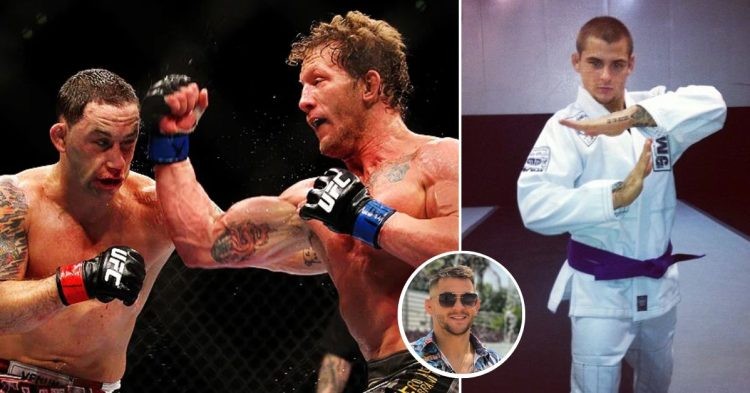 Time flies! Dustin Poirier and Frankie Edgar will be competing on the same card this weekend at UFC 281 inside Madison Square Garden on November 12 in New York. Edgar will compete in his retirement fight, taking on  Chris Gutiérrez on the main card of the UFC PPV.

It’s interesting to note that Dustin Poirier made his UFC debut on a card headlined by Frankie Edgar. Speaking to UFC 281 media ahead of the PPV, Poirier shared his thoughts on Frankie Edgar and admitted how quickly time has flown now that he thinks about it.

“When I made my UFC debut, he was main eventing in MGM Grand in Las Vegas. It’s crazy man, time flies!” Poirier revealed.

Dustin Poirier made his UFC debut back at UFC 125 on January 1, 2011, more than a decade ago. At the time, Frankie Edgar reigned supreme as the UFC’s Lightweight Champion. Having dethroned BJ Penn from the top, Edgar was one of the biggest names in the history of the company and continues to be.

It was at UFC 125 that Frankie Edgar took on Gray Maynard in his second title defense. Maynard, who had a bit of a history with Edgar after having beaten him once more than two years ago in 2008, put on a performance of a lifetime inside MGM Grand Arena.

Gray Maynard was the first fighter to beat Frankie Edgar and at UFC 125, he once again made Edgar pay. After one of the most exciting first rounds in the history of the sport, Edgar’s comeback in the following rounds has made Edgar vs Maynard 2 one of the greatest title fights in the UFC. The match ended in a split-decision draw.

Dustin Poirier considers himself fortunate enough to interact with the then UFC Lightweight Champion Frankie Edgar very early in his UFC career. Poirier went to Tom River, New Jersey to train with Edgar and was his sparring partner for the Benson Henderson fight.

“I’ve been a big fan of Frankie for a long time. Had a great opportunity years ago to go out to Toms River and train with him when he was preparing for Ben Henderson, be a sparring partner, and watch the way he works. It was also a good time in my career to go through that with him.” Poirier recalls.

On November 12, Poirier and Edgar will once again share the card. And while UFC 125 was Poirier’s debut, UFC 281 will mark Frankie Edgar’s last fight.