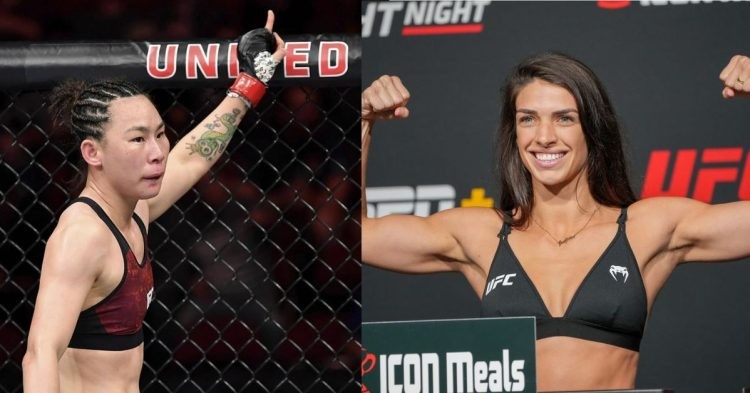 After a successful main event, the UFC is headed for its upcoming card, UFC Fight Night: Dern vs. Yan, also known as UFC Vegas 61. This event will be aired live on UFC on ESPN+ 69 and will take place on October 1, 2022, at the UFC Apex facility in Enterprise, Nevada.

UFC Vegas 61 will feature many electrifying bouts and will be headlined by two strawweights, Mackenzie Dern and Xiaonan Yan. The co-main event will feature an exciting fight between Randy Brown and Francisco Trinaldo.

It is worth mentioning that a bantamweight bout between former UFC Bantamweight Champion Cody Garbrandt and Rani Yahya was expected to take place at this event. However, Yahya withdrew again in mid-September for unknown reasons. The promotion is currently seeking a replacement opponent.

The main card will feature a women’s strawweight bout between No.5-ranked contender Mackenzie Dern and No.6-ranked Xiaonan Yan. Both fighters will be hoping for a statement win to get in the title contention.

Mackenzie Dern might be the best grappler in women’s MMA today. Her ability to establish position before thinking to go strike or transition sets her apart. She also has a strong ground control, which has won her many fights.

On the other hand, Yan is coming off a decision loss against Marina Rodriguez in UFC 272. But Yan is a good striker and perhaps one of the best in her division.

In the co-main event there will be a welterweight battle between two veterans Randy Brown and Francisco Trinaldo. In the twilight of their career, both of them must be looking for a dominant victory.

Under the main card, a featherweight bout has been scheduled between Sodiq Yusuff and debutant Don Shainis. This bout is expected to be an absolute brawl with both fighters aggressively looking to make a statement win.

A lightweight bout betweem Mike Davis and Uroš Medić was scheduled for the event. However, Medić was removed from the bout for undisclosed reasons and replaced by Viacheslav Borshchev.