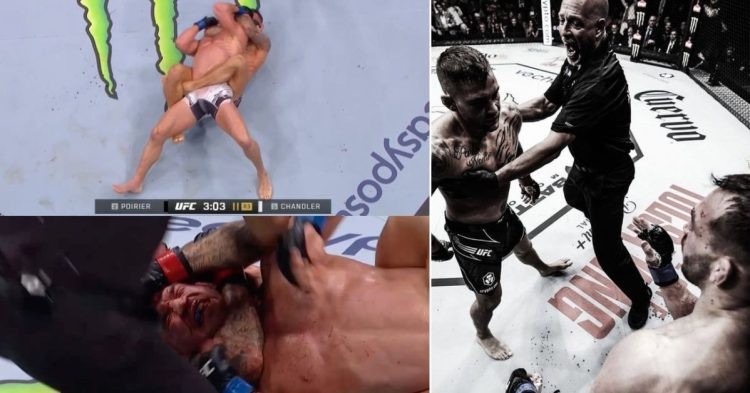 Dustin Poirier made an emphatic statement in his return to the UFC Octagon as he submitted Michael Chandler in the third round at UFC 281. Both the fighters put on a fighting spectacle for fight fans present inside the MSG in yet another performance for the ages from both fighters.

During the post-fight Octagon interview, Poirier took a subtle jibe at Islam Makhachev, who had earlier mocked Poirier’s BJJ skills.

“All this guy — Chandler, Gaethje, Poirier, who? This guy all don’t have nothing. In the ground, they, I don’t know.” Targeting Dustin Poirier, “Black belt, who give him that? We have to check that now. And we have to cancel, brother, many black belt because they make the jiu-jitsu look bad because a lot of guys have black belt but I don’t know.” Makhachev added.

Responding to those comments, Poirier said, “Who ain’t got Jiu-Jitsu?”

Leading into the fight, Poirier was asked to respond to those comments, however, at the time, Poirier had decided to keep mum on the remarks. However, he did add, “It’s definitely an insult, But it is what it is.”

Needless to say, Poirier wasn’t really in a position to say anything at the time considering his last two losses inside the Octagon have come via way of submissions. However, after a submission win like that, it’s safe to say Poirier’s response to Islam Makhachev came in the most prolific manner.

Who is next for Dustin Poirier after the win at UFC 281?

It’s safe to say that a title shot is not next for Dustin Poirier despite the submission win at UFC 281. Possible options for Poirier include Rafael Fiziev and Beneil Dariush if Poirier is looking for fresh blood. Moreover, a rematch against Charles Oliveira and Justin Gaethje is also a real possibility.

Every bit as good as advertised 💎 #UFC281 pic.twitter.com/X95cHC0av7

Despite the victory against Chandler, there were still a lot of holes in Poirier’s skillset as far as his ground game is concerned. Chandler was able to dominate Poirier on the ground in the second round for the full five minutes, even getting his back and bringing him to the same position Oliveira and Khabib did during their bouts.

Do you think Poirier does any differently going against a grappler in his next fight? Do let us know in the comments section.