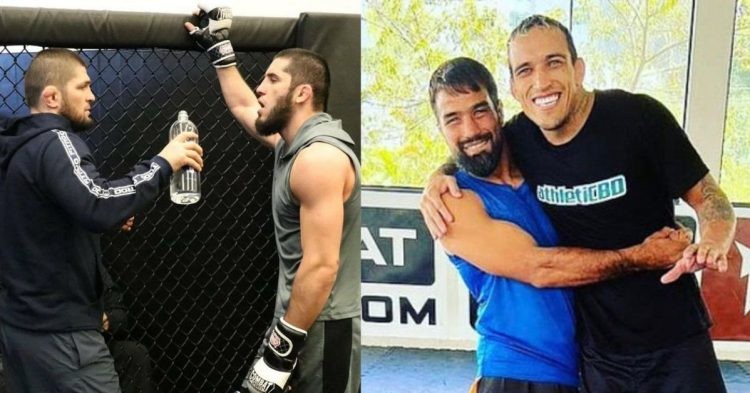 Charles Oliveira is set to take on Islam Makhachev later this weekend at the UFC 280. The UFC will be returning to the Fight Island in Abu Dhabi with arguably one of the best cards ever.

Going into the fight, a lot has been said about said about Islam Makhachev’s wrestling superiority over Charles Oliveira. However, Makhachev might not be as dominant in wrestling against the Brazilian as many people expect him to be.

In order to prepare for his Islam Makhachev, Charles Oliveira is being trained by multiple time Iranian wrestling champion Alireza Noei. The Iranian wrestler joined the Chute Boxe training facility a few years ago with the goal of helping the fighters at the facility become better wrestlers.

Alireza Noei has a MMA record of 7 wins and 2 losses. He had a promising career with four submission wins in his resume. He has fought under various promotions such as Future FC, MMA Brazil Tour, Standout Fighting Tournament.

However, he fought his last fight on October 16th 2021. Ali Reza has suffered one knockout loss and one submission loss in his career. After a short MMA career, Ali Reza joined Chute Boxing.

Interestingly, Alireza Noei has lived and trained in Dagestan himself. Moreover, he claims to have wrestled better wrestlers than K habib Nurmagomedov and Makhachev. Noei has been working closely with Charles Oliveira in this camp and it will be interesting to see if Oliveira can minimize the threat imposed by the Dagestani when the two clash inside the octagon later this weekend.

In the UFC 280 countdown, talking about Alireza Noei talked about his experience in Dagestan and stated:

“I was living in Dagestan for almost five months. I faced wrestlers who are much better than Islam and Khabib. I already know all of his strengths at wrestling. They know this is a tough fight for him.”

Both Charles Oliveira and Islam Makhachev have been on a pretty impressive run inside the octagon. While ‘Do Bronx’ is on a 11-fight winning streak, the Dagestani has not been defeated in his last 10-fights.

Coming for the crown with the heart of a lion 🦁

Interestingly, despite Oliveira’s longer winning streak, he walks into the fight as an underdog. However, it is worth noting that the Brazilian should not be undermined at all. ‘Do Bronx’ has been the underdog in the majority of his last fights and has still managed to walk out of the octagon with his hand held high.

Moreover, Islam Makhachev has not fought the level of opposition Charles Oliveira has fought. And this could play a vital role in deciding the outcome of the fight as well. That said, it is safe to say that the Brazilian can well and truly be the one to end Makhachev’s winning streak and become a two-time UFC champion.