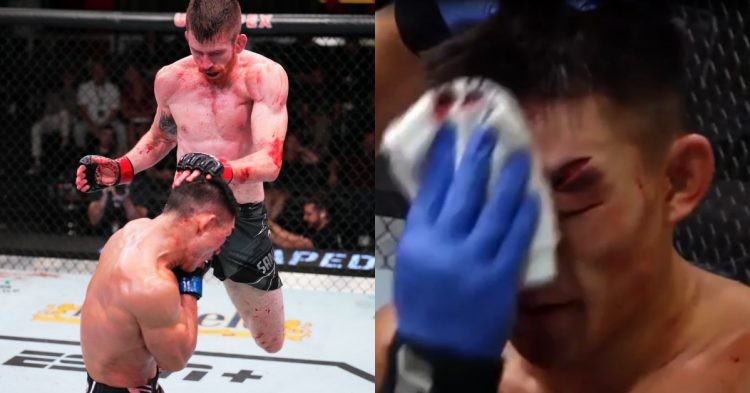 Cory Sandhagen emerged victorious against Song Yadong in the main event of UFC Vegas 60. It was a wild fight as long as it lasted, with both the fighters giving it all they had. Due to a huge cut above Song’s left eye, the fight had to be stopped after the end of round four.

According to the official scorecards released by the UFC two out of three judges had the fight scored 38-38 after the end of round 4, that itself suggests how close the fight was. Nevertheless, Sandhagen got the job done. A huge elbow in round two opened a massive cut above Song’s left eye and that turned out to be the winning move for Sandhagen and got him the well-needed victory.

Will this victory get him to a title fight? Probably not. Song Yadong was ranked 10th in the Bantamweight division and Sandhagen four. That suggests Sandhagen would still need to fight a top-five fighter to get into the title picture. With Petr Yan already blowing out his chance against the current Champion Aljamain Sterling and TJ Dillashaw booked to fight Sterling next month, a matchup between Sandhagen and Merab Dvalishvili makes full sense.

Merab Dvalishvil is on a highly impressive eight-fight win streak, coming off an impressive performance against the former champ and UFC legend Jose Aldo, his confidence would be sky high. A number one contender fight is what it most likely will be.

Cory Sandhagen wants to fight one more time this year

This was Sandhagen’s first fight this year and he says he will love to fight one more time by the end of it. Talking to the media post-fight Sandhagen said “I think as a martial artist I try not to have many opinions about anything. I live in a way where I just more or less try to go with the flow and let life give me opportunities and me take them so Chito or Merab are the obvious names, both of them pose very different challenges. Two completely opposite fighters so …I don’t really care man, give me one of them for Christmas”.


Chito Vera and Merab Davlishvili are the obvious matchups to be made for Sandhagen. Fighting Chito Vera would certainly be a more favorable match-up for Sandhagen due to his style but it probably won’t guarantee a title shot as much as fighting Merab will. It would be interesting to see what the UFC does as it’s pretty certain that we will see Sandhagen step inside the cage one more time this year.
Tags: Cory Sandhagen
Previous Post