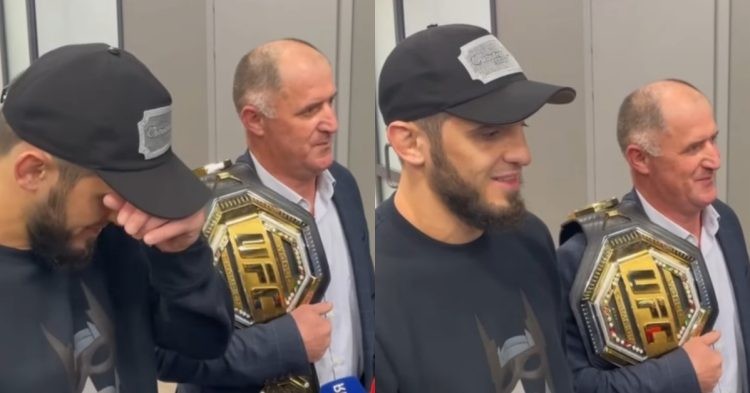 Islam Makhachev is the new UFC Lightweight Champion! The Dagestani fighter submitted the previous 155lbs champ Charles Oliveira at UFC 280 to win the vacant title. It was obviously a proud moment for Team Khabib as their hard work paid off at the biggest stage possible. After the impressive victory, Islam headed home and shared an emotional moment with his own father.

Makhachev was born in the Makhachkala region of Dagestan. Since his childhood, Islam was under the guidance of Khabib Nurmagomedov’s father Abdulmanap Nurmagomedov. Although his story with Team Kahbib is widely known, not much is public regarding Islam’s side of the family. In 2021, Makhachev got married in a big ceremony. But there is no information regarding his wife.

But, perhaps for the first time, fans got a look at Islam’s family life. In a recently released video, Islam was seen visiting his home country. During that, he was filmed putting the newly won belt on his father’s shoulder. It was a beautiful scene and even Islam could not help but shed a tear.

So the question may become, why did the 31-year-old omit his own father from his post-fight interview? As it is evident, Makhachev does not want to put any limelight on his personal life and wants to protect his family members’ privacy. On top of that, Khabib Nurmagomedov and Abdulmanap were the ones to put in all the hard work to turn Makhachev into a beast of a fighter.

But from the video, it looked like Islam was pretty close to his father. However, his father’s name or occupation remains unknown.

Islam Makhchev gets a hero’s welcome in Dagestan

Islam Makhachev received a grand welcome in his home country of Dagestan. Videos circulating on the internet, show a sea of people gathering outside to greet their hero. Makhachev also thanked his fellow countrymen for their support over the years.

“I’d like to thank everybody who came here to greet and support me. Later we will eat together. There we can talk and take pictures.”

The 31-year-old becomes only the second Dagestani fighter to hold a championship in the UFC. Khabib Nurmagomedov also deserves a lot of credit for Makhachev’s success. Khabib flew out 20-30 fighters to UAE in preparation for the UFC 280 event. The fight camp cost them a reported $1 million. But Khabib stepped in and paid the bill without any hesitation.

It looks like Islam is also following in his cousin’s footsteps. Both Khabib and Islam stand as shining examples for the younger generation. They are the perfect role models who prove, with dedication and hard work, one can achieve anything one wants.